Try Not to Sweat! This is Actually the Melting Point of Gold 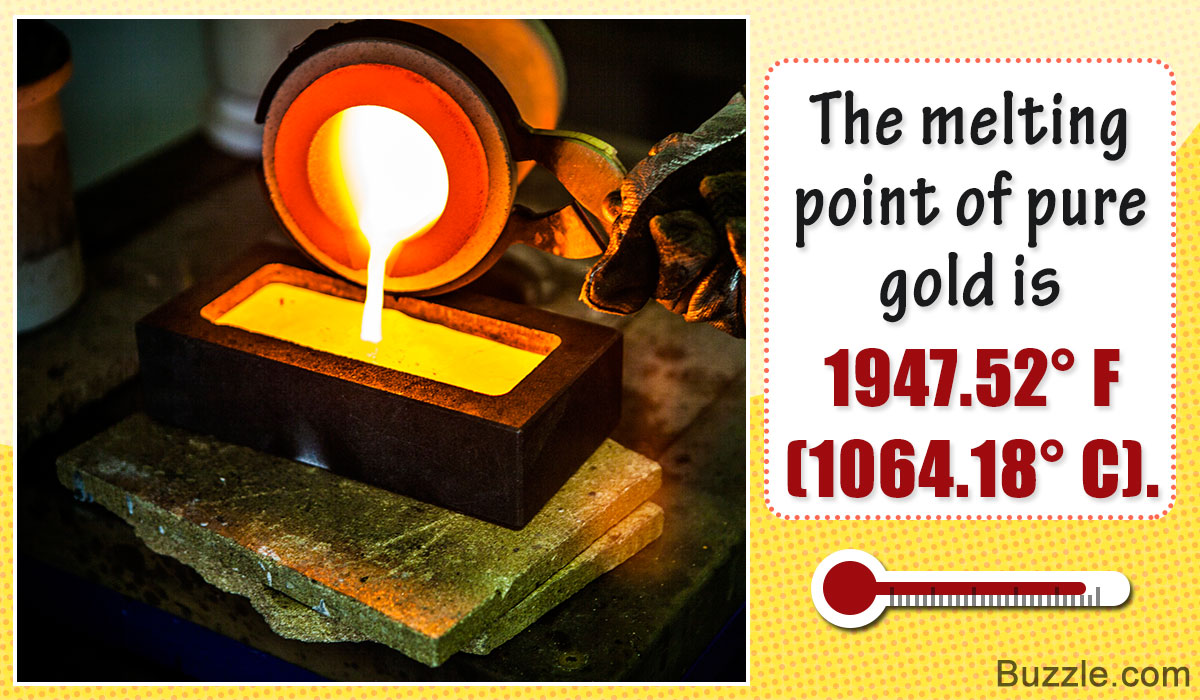 Gold is one of the precious metals that can be melted and molded into new forms. The melting point of pure gold is 1947.52° F (1064.18° C), but this may vary for different gold alloys.

The association of humans with gold has a very long history. It is believed that more than 80% of the gold that we are using today, has been used for hundreds of years. So gold can be melted and reused in different forms.

At What Temperature Does Gold Melt?

In its pure form (24-karat), the melting point of gold in Fahrenheit is 1947.52°. In Celsius, it is 1064.18°, which will be around 1337.33 K (Kelvin). It is that temperature, wherein the metal gold turns from the solid state to liquid state. Gold is one of the few metals that retains its natural color even in the molten form. However, the melting point may vary with the type of metal added to it. In case of gold alloys, where metals like sliver, nickel, copper and platinum are added, the melting point differs from pure gold. These metals are added to gold, so as to change the melting point, to make it harder and also to alter its color.

So it is evident that the melting point of gold varies with the different variants. It is said that melting gold to a temperature that is slightly higher than the standard melting point, is beneficial for better flow of the molten metal. However, overheating must be avoided and so the maximum limit should be the standard melting point plus an additional 100 degrees. Even the crucible that is meant for melting gold, must be chosen carefully. Those which are made of graphite can be used only for yellow gold and not for white gold. The crucible must be very clean and any residue in it will contaminate the gold. Different types of torches like butane torch, propane torch, etc. are used for melting this metal. Another requirement is flux, which is a material that is added while melting metals. The flux (like borax) attach itself to impurities, so that they can be easily removed. Once melted, the molten gold is poured into molds, for cooling. If you know the correct procedure, gold can be melted at home, provided you wear proper safety equipment.

It is not advisable to melt and mold gold jewelry for reuse, without proper refining. This is because gold jewelry is not pure gold and once you melt it, the resultant metal will be porous and brittle with a pitted surface. Once molded into a new form, it cannot be used on a regular basis, as this gold can break or bend easily. Even a jeweler would cut the cost of refining and remodeling from the value of old gold jewelry, if you approach him for the same.

Know More About The Metal

This metal has been associated with God, wealth and power since time immemorial. Even though, there is no clear-cut evidence regarding the discovery of this yellow metal, it is suggested that it was first used by the civilizations in the Middle-East. However, from that time, till date, the value of this metal has never come down. Even today, it is an important part of global economy.