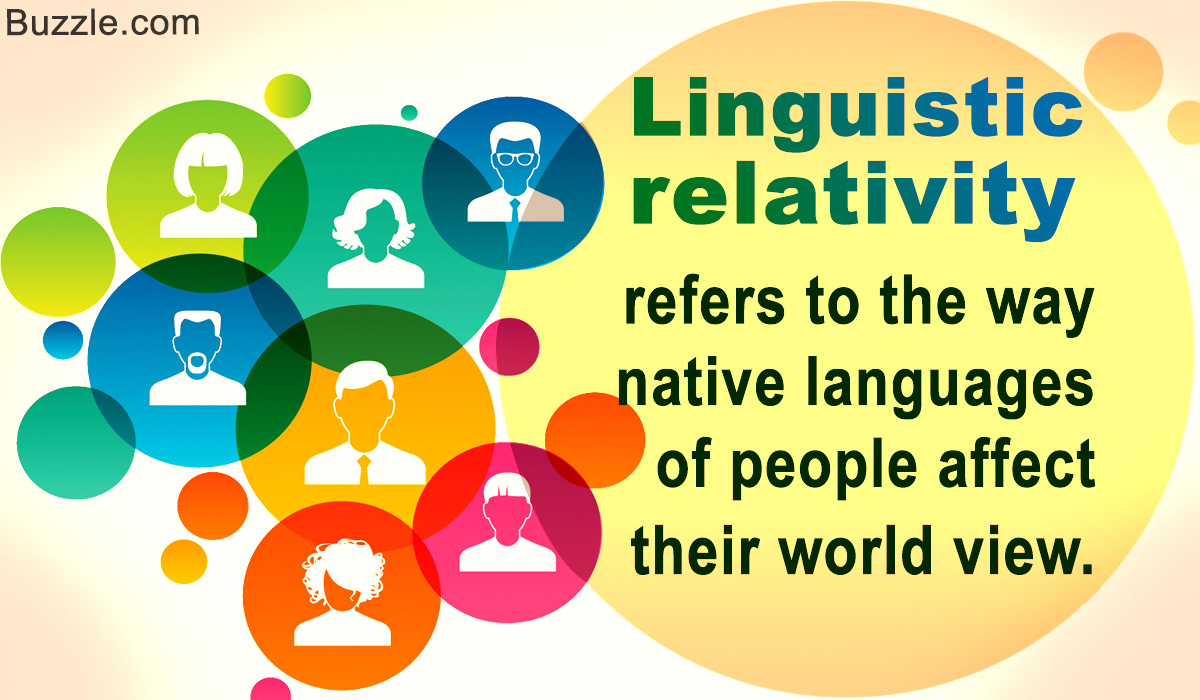 Linguistic relativity, also known as the Sapir-Whorf hypothesis, holds that the structure of the language natively spoken by people defines the way they view the world and interact with it. This post helps you understand this concept with the help of examples.

The linguistic relativity hypothesis posits that languages mold our cognitive faculties and determine the way we behave and interact in society. This hypothesis is also called the Sapir-Wharf hypothesis, which is actually a misnomer since Edward Sapir and Benjamin Lee Whorf never co-authored the theory. Rather, the theory was derived from the academic writings of Whorf, under the mentorship of Sapir. Hence the hypothesis is referred to as the principle of linguistic relativity. This nomenclature also acknowledges the fact that Sapir and Whorf were not the only ones to describe a link between thought and language, and also implies the existence of other chain of thoughts regarding this concept.

This theory has been widely mentioned in various diverse branches of social and behavioral sciences such as anthropology, linguistics, psychology, etc, but despite this, the validity of the theory is being disputed till date. Some scholars claim it to be trivially true, while others believe it to be refuted. To determine the validity and the logic behind the theory, one must therefore place the hypothesis within its historical context, find supporting empirical research finding, and finally examine the theoretical explanations and examples used to explain the relation between language and thought.

The strong version of the hypothesis has largely been refuted, but the weaker versions are still being researched and debated as they often tend to produce positive empirical results.

♦ The possibility of thought being influenced by the language one spoke has sparked many a debates in various classical civilizations. In the Indian linguistic scholars, Bhartrihari (600 A.D.) was a major proponent on the relativistic nature of language. This same theory was also highly debated in ancient Greece between Plato and sophist thinkers such as Gorgias of Leontini. Plato believed that the world consisted of a pre-given set of ideas that were merely translated by language, whereas Gorgias held the belief that ones experience of the physical worlds was a direct function of language usage.

♦ The first clear idea of linguistic relativism was given in the early 19th century by the German romantic philosopher Wilhelm von Humboldt. He proposed that language was the fabric of thought, and that one’s thoughts were produced as a result of an internal dialog of a person in their native language. He also proposed that Indo-European languages such as German and English, that had the same basic syntax and structure were perfect languages, and that the speakers of such languages had a natural dominance over the speakers of other not-so-perfect languages.

♦ With this ideology in view, the American linguist William Dwight Whitney, in the 20th century tried to eradicate the Native American languages by claiming that their speakers were savages and would be greatly benefited if they accepted English as the choice of language and chose a civilized way of life.

♦ Franz Boas was the first linguist to challenge this school of thought. He advocated equality between all cultures and languages. He did not believe in some languages being superior than others, but that all languages were equally capable of expressing any content but the way and means of expression differed. His student, Edward Sapir, believed in Humboldt’s idea that languages were the key to identify and understand the different ways in which different people viewed the world, and he improved on the idea and proposed that no two languages were ever similar enough to be perfectly translated, and that speakers of different languages would perceive reality differently. Despite this belief he strongly rejected the idea of linguistic determinism, claiming that it would be naive to believe that his experience of the world is solely dependent on the pattern and type of language he spoke.

♦ His vague notion of linguistic relativity was taken up and studied further by his student, Benjamin Lee Whorf. He studied Native American languages, to prove that differences in grammatical systems of a language and its usage had a major effect on the way the speakers perceived the world. He also explained how scientific accounts of event differed from religious accounts of the same events. He explained his theories in the form of examples rather than in an argumentative form, to showcase the differences observed in behavior on use of different languages. He also claimed that certain exotic words referred to exotic meanings that were rather untranslatable.

♦ Roger Brown and Eric Lenneberg widely criticized Whorf’s ideas and attempted to test them. They formulated his inferences into a testable hypothesis, which they named the Sapir-Whorf hypothesis.

Structure-centered Research – It involves the study of structural peculiarities in a language and the possible consequences it has on the thought process and behavior of the speaker. For example, the Hopi language expresses and describes time in a manner different from that of English, and hence the Hopi people perceive time differently than others.

Domain-centered Research – This involves choosing a semantic domain and comparing it across a wide range of different languages, to determine its relation to behavior. A common example of this type is, research on color terminologies or spatial categories in different languages.

Behavior-centered Research – This deals with studying various types of behavior among diverse linguistic groups and attempting to establish a viable cause for the development of that behavior.

Some philosophers have hypothesized that if our perceptions are influenced by language, it may be possible to influence thought by conscious manipulation of language. This has eventually led to the development of neurolinguistic programming, which is a therapeutic approach towards the use of language to seek and influence cognitive patterns and processes.

The same philosophy has given rise to the possibility of generating a new and better language that could enable newer and better ways of thinking. One such language is Loglan, created by James Cooke Brown in an attempt to test this possibility. The speakers of Loglan claim that the language increases their logical thinking skill.

Another such language was created by Suzette Haden Elgin, and it was called Láadan. It was designed to easily express a feminist world view. The language Ithkuil, designed and created by John Quijada, tries to use multiple cognitive categories at a single time, while simultaneously keeping its speakers aware of this.

♦ Linguistic philosophers like Eric Lenneberg, Noam Chomsky, and Steven Pinker have criticized the Whorfian hypothesis and do not accept most of the inferences about language and behavior put forth by Whorf. They claim that his conclusions are speculative since they are based on anecdotal evidence and not on results of empirical studies.

♦ Another criticism that this hypothesis faces is the problem of translatability. According to his theories, every language is unique in its description of reality. This would make translation of one language into another practically impossible. However, languages are regularly translated into each other every day, and hence challenges Whorf’s inference.

♦ Whorf observed two rooms at an gasoline plant. One room contained filled gasoline drums, while the other contained empty gasoline drums. The workers had a more relaxed and casual attitude toward the room housing the empty drums, and were seen to indulge in smoking in that room. The word “empty” may have suggested that the situation poses no harm, when in fact, smoking near the empty drums is also perilous, as they still contain leftover flammable vapors of gasoline.

♦ At a factory, metal containers were coated on the outside with spun limestone. Since the word “stone” was associated, the workers did not keep them away from heat or fire. Since spun limestone is a flammable substance, the workers were taken by surprise when the containers that were lined with “stone” caught fire.

With the current trend of people learning and excelling at languages that are not natively spoken by them, the concept of bilinguism has emerged. Since bilinguists can perceive and express experiences in native and foreign languages, the possibility of a unique perspective emerges and is interesting to study from a cognitive point of view.