Carbon tetrachloride, also known as tetrachloromethane, is a compound containing carbon and chlorine. It is an inorganic compound that is non-flammable. This ScienceStruck post provides you with the Lewis dot structure diagram and the polarity of carbon tetrachloride. 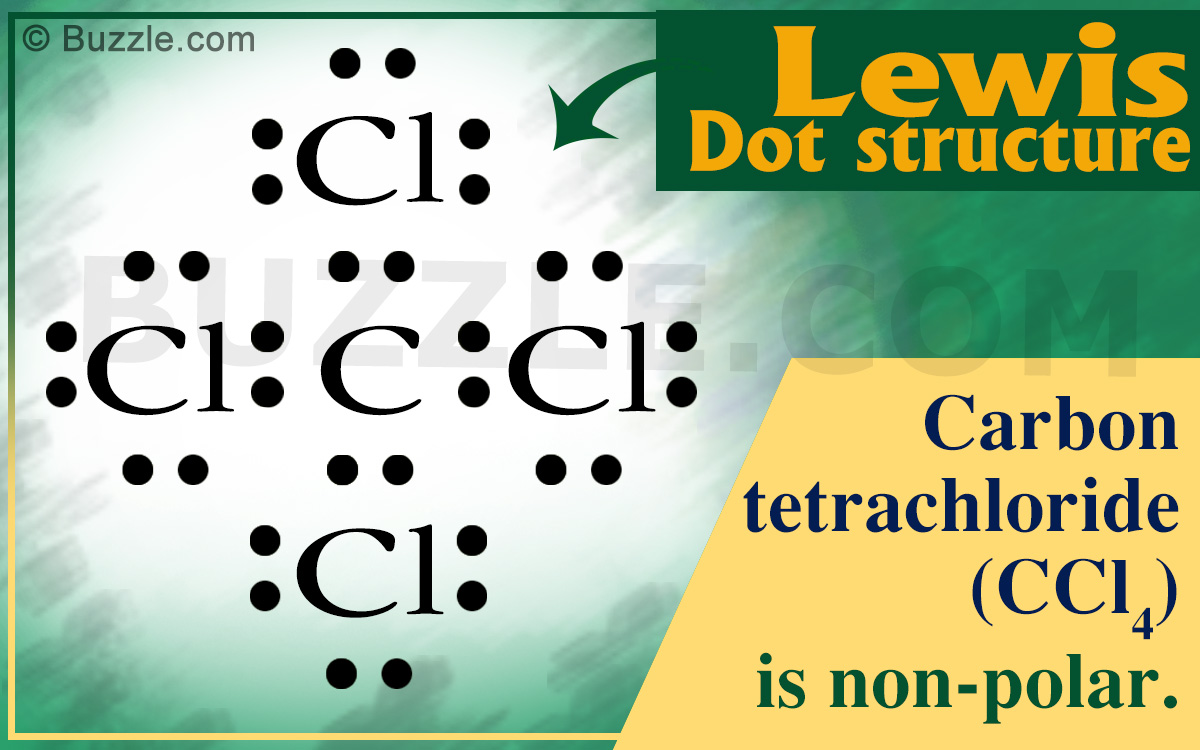 Carbon tetrachloride, also known as tetrachloromethane, is a compound containing carbon and chlorine. It is an inorganic compound that is non-flammable. This ScienceStruck post provides you with the Lewis dot structure diagram and the polarity of carbon tetrachloride.

What are the Various Names of CCl4?

Carbon tetrachloride, a covalent compound, has multiple names based on its uses. A few of them are Halon-104, Freon 10, Refrigerant-10, Carbon Tet, Tetraform, methane tetrachloride, Tetrafinol, and benzinoform.

Tetrachloromethane or carbon tetrachloride is known for its aromatic smell, which resembles that of chloroform. It is highly toxic in nature and has a high density value. This compound can be prepared by reacting methane with chlorine atoms. Further ahead, we explain the polarity values and Lewis dot structure of this compound.

This compound has a tetrahedral structure as represented in the image above. The only carbon atom present is located at the center of the tetrahedron. Each of the four chlorine atoms are linked to the central carbon atom using a single covalent bond. This implies that there are a total of four C-Cl bonds. Thus, each dipole that is generated points from the central atom to the vertices of the tetrahedron. (Note that dipoles are generated due to the difference in electronegativity between different atoms.) Due to this, the dipoles get canceled out by each other. However, if the chlorine atom is replaced by any other atom, dipoles would be generated, making the resultant molecule polar.

The Lewis dot structure diagram depicts the placement of electrons in the molecules of any compound. The electrons are represented with the help of circular dots. This diagram displays the bonds formed as well as lone pairs of electrons.

Consider the diagram given above. Carbon forms one covalent bond with each chlorine atom, which is electronegative in nature. As we already know, the atomic number of carbon atom is 6, and that of chlorine is 17. Thus, carbon and chlorine have 4 and 7 valence electrons, respectively. This implies that carbon requires 4 electrons and chlorine requires 1 electron to satisfy its octet. The carbon atom shares 1 electron each to form one covalent bond with every chlorine atom to achieve its octet.

The number of electrons around the carbon atom is 8. The remaining 24 atoms must be distributed in the structure in such a way that all the atoms have 8 electrons in their valence orbital. Considering the four atoms of chlorine, each atom will have 6 electrons around it. The atom of each element present in this compound is stable, in turn, making the compound quite stable.

Is CCl4 Polar or Non-Polar Molecule?

When it comes to polarity of a compound, we must understand the fact that it is directly related to its structure and shape. Molecules having their charges unevenly distributed are said to be polar in nature, whereas, those molecules whose charges are evenly distributed are non-polar. In case of CCl4, the charges are distributed uniformly around the central carbon atom. Due to this symmetry, tetrachloromethane is said to be non-polar, even though it contains polar bonds.

What is the Value of the Bond Angles in CCl4?

As we already learned that this compound has a tetrahedral geometry, the bond angle between C-Cl atoms is 109.5º. As carbon bonds comes with four chlorine atoms, all the C-Cl bonds formed are of the same nature. Thus, the bond angles for all these bonds remain the same.