Interesting Facts about the Continental Slope

Together, the continental slope and continental rise account for about 8.5 percent of the ocean floor.

Interesting Facts about the Continental Slope

By definition, the continental slope is the steep slope that is located between the seaward edge of the continental shelf and the abyssal plain. It is formed when sediments in the form of mud, gravel, and sand accumulate at the edge of the continental plate over several years, make the structure unstable, and eventually bring it down. Nevertheless, there are some things about this geological feature that you will find interesting. 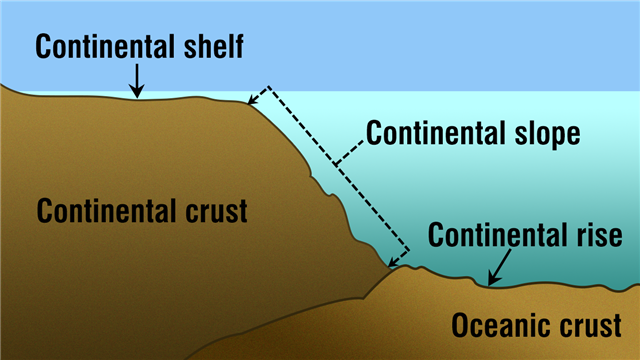 ❒ Though the average gradient of the continental slope is 4° (i.e., an average depth of 152 m per mile), there do exist regions where a gradient of up to 15° has been recorded. This is particularly the case at active margins.

❒ In the ocean, the temperature drops and pressure increases with depth. That explains why the water is so cold and the pressure is unusually high at the continental slope.

❒ The low light conditions in this part of the marine biome can be attributed to weak sunlight penetration, with most sunlight being either absorbed by the water at the surface or reflected back into the atmosphere.

❒ As a result of abiotic factors like cold water, pressure, and low light, very few lifeforms are found in this part of the marine biome. Unlike the continental shelf, the continental slope is devoid of vegetation and thus, doesn’t attract many species.

❒ The list of animals found on the continental slope may not be lengthy, but has some interesting species to its credit. These include a variety of deep-sea rockfishes, rattails, hagfishes, dover soles, species like flashlightfish and headlightfish, deep-sea red crabs, etc.

❒ As far as adaptations are concerned, some of these species have the ability to produce their own light, which they use to attract prey and/or repel predators. Similarly, some of them have large amount of water stored in their body to neutralize high pressure in the surroundings. Almost all of them have a slow metabolism, so they can go without food for an extended period.

❒ In the absence of light, colors are useless at the dark depths of the continental slope. So most species here are either black, brown, or red. That the species here are red in color shouldn’t come as a surprise, as the color red appears as black in this environment and helps species blend in their surroundings.

❒ Also worth taking a note of is the presence of cold seeps from where gases escape the crust. These seeps are very crucial for the marine ecosystem as they support quite a few chemotrophs (i.e., organisms that obtain energy from organic and inorganic compounds).

As the stock of fish in the continental shelf is fast depleting in several parts of the world, fisheries have turned their attention to the continental shelf. Now that’s a major cause of worry, as we know very little about species found in this part of the marine biome, and that, in turn, makes them vulnerable to overharvesting.