Uses and Information of Diorite That is Sure to Surprise You 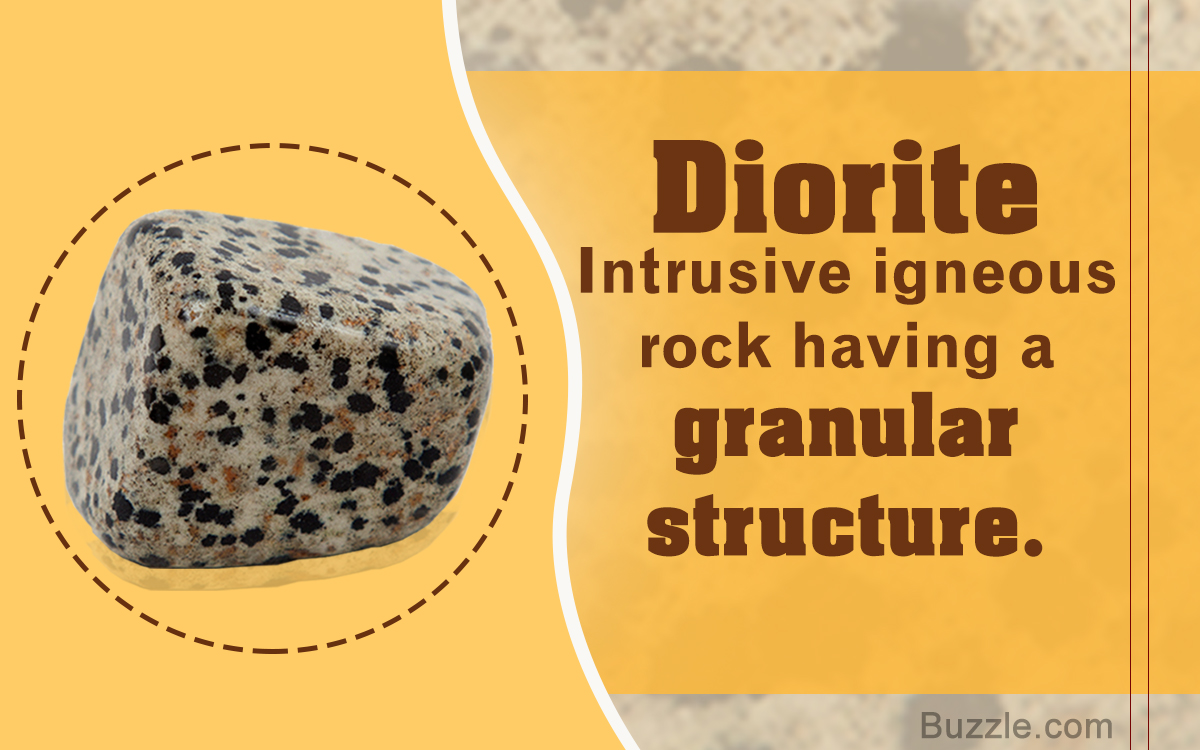 Diorite is said to be an intrusive rock that occurs in the hues of gray. It is formed from the magma that cools under the surface of the Earth. We provide you with information regarding the origin, facts, and properties, and uses of diorite rock.

Examples of Antiques Made from Diorite

– Cobblestone streets in Scotland, England, etc.
– Statue at Gudea in Mesopotamia dating back to the BCE.
– Porphyry vase in predynastic Egypt dating back to 3,600 BCE.

Diorite is a crystalline rock that mainly comprises white plagioclase feldspar, pyroxene, hornblende, and biotite. This is an igneous rock having a granular structure and is formed in areas known for active volcanism. It doesn’t contain flat planes too.

How is Diorite Rock Formed?

Volcanoes form beneath the Earth’s surface, within its crust. The magma is in the semisolid form. When the temperature rises to a very high degree, the magma oozes out to the surface from the crater of the volcano. However, sometimes the magma doesn’t succeed in reaching the Earth’s surface and turns into solid state. This leads to the formation of diorite.

Where is Diorite Rock Found?

This rock resembles a dark-colored granite rock. It has been used in making steps of the St. Paul Cathedral church located in London. It is found on the Coromandel Peninsula, Darren mountains, Northland, west Nelson area, Fiordland, Stewart Island (New Zealand) and Leicestershire (Central England).

» The hardness of diorite rock is 7 on Moh’s scale.

» This rock has a speckled appearance due to the presence of different types of minerals.

» Foliage or layered arrangement is absent in its structure.

» It can contain partial amounts of olivine, quartz, and microcline.

» The texture of this rock is coarse-grained, i.e., its grains are larger in size.

» The grains exist in an interlinked pattern.

Facts and Information about Diorite Rock

» This rock is called plutonic rock, which means the rock has solidified below the surface of the Earth. Other than diorite, granite and gabbro are two igneous rocks that have been formed in the same way.

» In addition to its constituent minerals, it may sometimes contain microcline, quartz, and olivin.

» This is one of the most uncommon igneous rocks.

» It has an appearance similar to that of a combination of salt and pepper.

» The varieties lacking hornblende are leucodiorite.

» It is easily recognizable by scientists and geologists due to its significant texture.

» It belongs to the mafic category of rocks.

» The supplementary minerals diorite can contain are sphene and apatite besides the oxides of iron.

The hardness of diorite makes it easier for craftsmen to cast it into the desired shape. In ancient times, it was used in military expeditions, art, as well as to shape granite. It is also used in the construction industry as well as for making paving blocks.

It is used for engraving text and letters and is considered apt for carving out statues. One such famous example is that of the code of Hammurabi, a 7-feet tall pillar that is made from diorite.