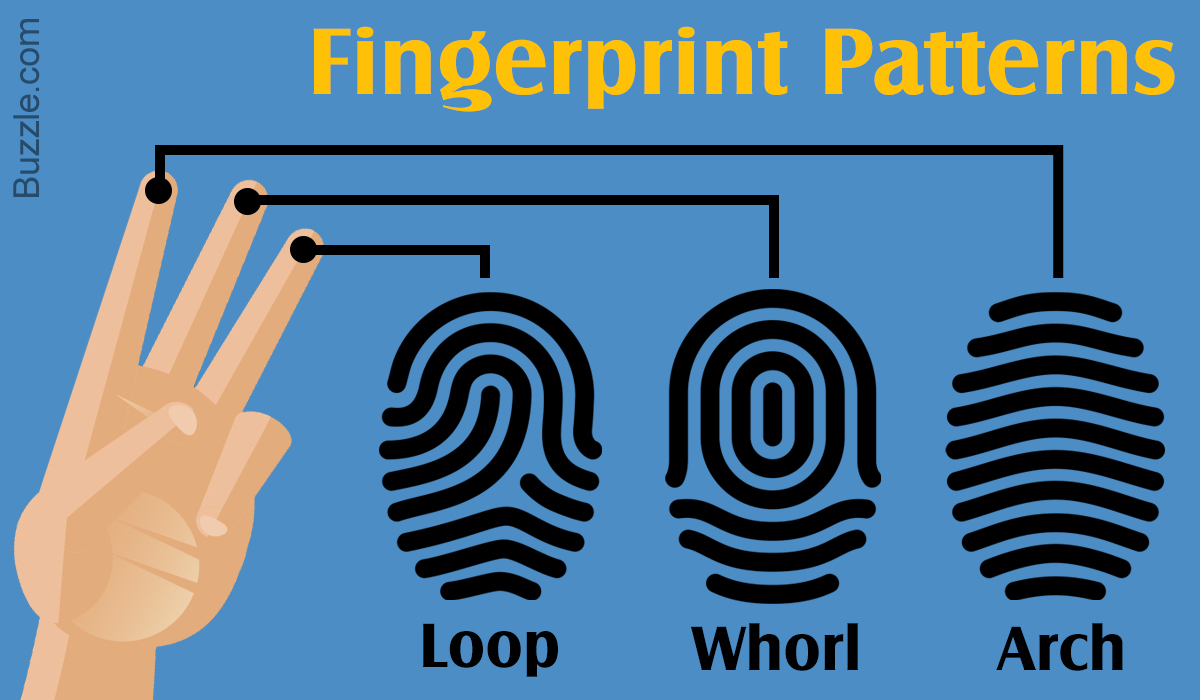 Every person in the world possesses a unique set of fingerprints. However, the differences between some can be very subtle. By studying the arrangement, shape, size, and number of lines in each fingerprint, experts have been able to classify them into unique patterns, which are used for identification.

It is estimated that the chances of one person’s fingerprints matching up exactly with someone else’s is only about one in 64 billion.

In the days gone by, many civilizations would use tattooing, branding, and even maiming as means of identifying people, especially the criminals. Thankfully nowadays, we have much less painful and much more humane methods at our disposal. One of the most useful and tried and tested method from among these is fingerprint based identification. In the following sections, we shall first go through a few facts regarding fingerprinting, and then study some of the common fingerprint patterns that are utilized in this process.

Although most of us today are aware of the basic fact that each and every individual possesses a unique set of ridges on the hands and fingers, using them to identify people was not really accepted or even fully understood until the early 1900s. The Federal Bureau of Investigation established its first fingerprint identification division in the year 1924, with a collection of 810,188 fingerprint files, taken mostly from the Leavenworth Penitentiary. These files became more and more important with the emergence of an increasing number of intellectual criminals, who crossed all legal and state lines.

It is said that before the digitization of their records, FBI’s fingerprint collection had become so massive, that if one would have piled up all the fingerprint cards in their files, he/she would have ended up with 133 stacks, each one as tall as the Empire State Building! Today, the FBI has in its possession millions of different sets of fingerprint records. This enormous collection comprises both, civil as well as criminal prints. The civil file includes prints of government employees and those that hold federal jobs.

Fingerprint identification is employed by police squads and agencies as a powerful weapon for combating crime. This technique helps crime fighters all over the world, by providing them with a reliable and accurate means of identifying suspects.

With the advent of the digital age, the use of fingerprinting has substantially increased. The affordable, yet reliable digital fingerprinting and biometric devices of today are widely used in a number of small and large organizations for identifying their employees. This technology has even made the task of criminal identification much more efficient.

A person’s weight, eye color, and hair color can change or be changed, but his fingerprints cannot be altered. They are unique to each individual, and can be differentiated and identified based on certain distinctive patterns made by the ridges. The following are some of the commonly used fingerprint patterns that have been identified and used in the process of fingerprinting.

There are basically three main forms of patterns that are made by the ridges of fingerprints.

1) Loops: Loops make up almost 70 percent of fingerprint patterns. They originate from one side of the finger, curve around or upward, before exiting out the other side. A loop pattern always comprises one delta, which is roughly a triangular formation in the pattern.

2) Arches: Arches are encountered in only 5 percent of the patterns, and comprise lines that slope upward and then down, similar to the outline of a small hill. There is generally no delta.

3) Whorls: Whorls constitute around 25% percent of all patterns. They are circular or spiral patterns, similar to eddies. A pattern that contains 2 or more deltas will always be a whorl pattern.

There are many subtypes of these three basic fingerprint patterns. The following is a visual representation of some of the common ones along with a brief description of each. 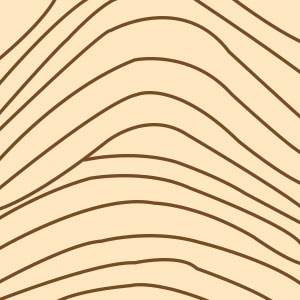 The simple arch is a hill-shaped pattern that is characterized by a smooth curved top. This pattern doesn’t include a delta. 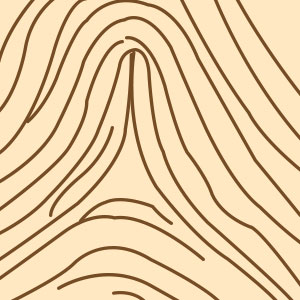 This pattern appears like a camping tent having a sharp tip at the top. 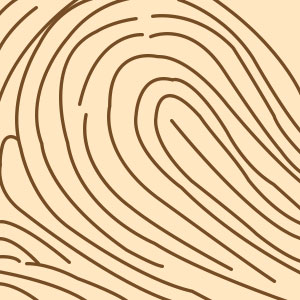 The ulnar loop is a loop-shaped pattern that resembles a waterfall which is flowing towards the little finger. Typically this pattern includes delta points. 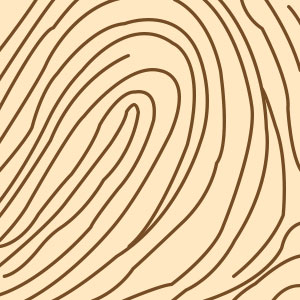 This is like a mirror image of an ulnar loop, with the waterfall-like pattern forming such, that it appears to flow towards the thumb. 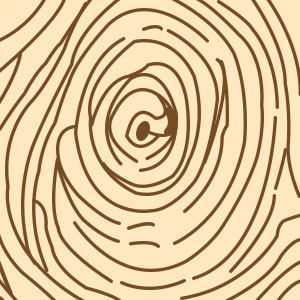 In this pattern, the lines on the fingertip appear to form a pattern comprising concentric circles. Most commonly, this pattern includes two delta points. 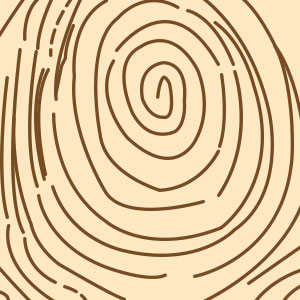 The spiral pattern is made up of lines on the finger that appear to originate from the center, and go round spirally in the outward direction. This pattern too includes two delta points. 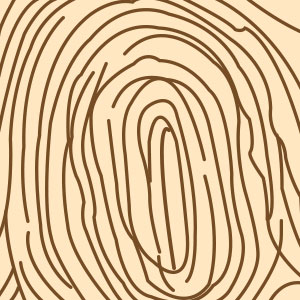 This is similar to the concentric whorl pattern, except that in it, the circles are oval-shaped, making it seem as if someone has pressed them from both sides. 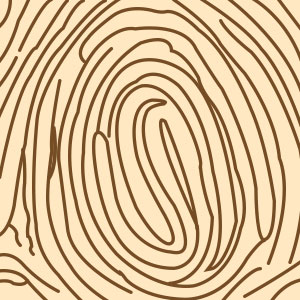 This is a pattern that looks similar to the yin-yang symbol. It includes multiple layers or circles surrounding it. 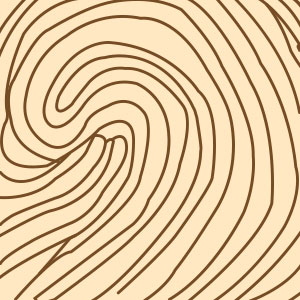 The composite whorl too appears similar to the yin-yang symbol. However, in it, the surrounding multiple layers or circles are missing. 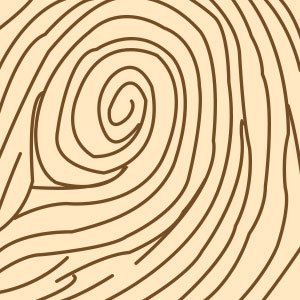 In this pattern, the central portion consists of a spiral or more than one circle. The end of each ring is connected in a straight line. Overall, it gives the impression of a peacock’s eye. It comprises two delta points – one close and the other away from the center. 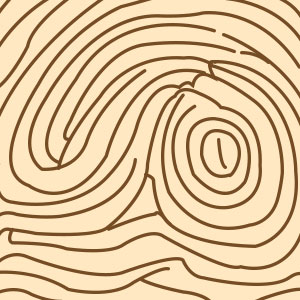 As the name suggests, the combination pattern is a mixture of two or more other pasterns, such as whorls and simple arches. These patterns usually include two or more delta patterns.

These are the commonly known types of fingerprint patterns that have been firmly established by fingerprint examiners and experts all over the world. They help in classifying the unique fingerprints of different people into types and sub-types, which are essential for the process of identification.