How Does a Spring Scale Work? It’s Comprehended Well Here

A spring scale is one of the most commonly used measurement tools. How does it work? If you are curious about the functioning of a spring scale, read this ScienceStruck post.

A spring scale is one of the most commonly used measurement tools. How does it work? If you are curious about the functioning of a spring scale, read this ScienceStruck post.

If you attach a weight to a spring scale and attach the scale to another spring scale, both scales will show the same reading; the upper one will show a slightly greater reading due to the weight of the second scale itself.

A spring scale is one of the most basic tools used to measure the weight of an object. In its simplest form, it is just a spring attached at one end and a pointer on a scale at the other. The lower end often has a hook to attach the object that has to be weighed.

It has uses in schools, where it is used by young students in basic experiments that don’t require exact measurements. It is a more rugged alternative to other, more sensitive devices of measuring weight, with its low cost and sturdy structure making up for the imprecise measurement. It functions on a very simple principle.

How a Spring Scale Works

The function of a spring scale is based on Hooke’s Law. 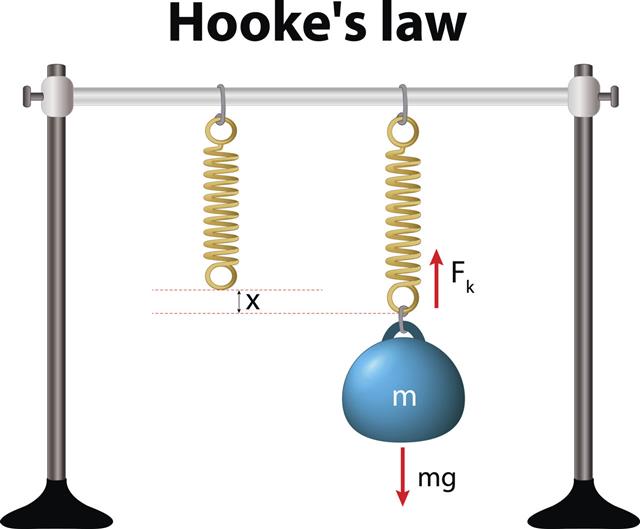 Hooke’s Law states that the force exerted on a spring is directly proportional to the distance it moves as a result of the force. This is represented in the form of the equation, F = k.X, where F is the amount of force applied to the spring, X is the distance traveled, and k is the constant stiffness of the particular spring. Here’s a simple illustration of this law.

Though this principle may seem patently obvious, its formulation led to vast improvements in fields such as seismology and watchmaking. In the latter, the same principle is used in the balancing wheel, to maintain the same rate of movement in the spring that controls the hands.

Through this equation, we can work out how much force, F, was applied on the string if we know its stiffness, k, and the distance it stretched, X. We can mark out the weights on the measuring scale based on our knowledge of how much a spring of a particular stiffness travels for a given amount of force.

Spring scales can be configured to display force (in Newtons) or weight (in g/kg), or both side by side; technically, only the former reading is accurate, since the weight is actually a representation of how much force it exerts on the spring thanks to the gravitational pull on the mass of the object (incidentally, this is also why the weight of an object is different on other celestial bodies, even though it has the same mass as it had on Earth).

While the spring scale is a handy tool for obtaining approximate weight, it has several drawbacks. It needs to be calibrated perfectly to measure the force accurately. It also needs to be checked constantly for signs of slackening. Since a spring will naturally slacken after repeated stretching, the scale needs to be replaced after a while, since a slackened spring will give erroneous results. As long as the spring is not stretched beyond its elastic limit, the spring scale is an excellent means of obtaining a workable approximation.

Spring scales can be used to measure weight in a wide range, depending on the stiffness of the particular spring. Small scales with sensitive springs can be used to measure differences of up to a gram or less, though these will break if heavy weights were attached to them. Stronger springs are used in scales that can measure thousands of kilos. A bathroom scale is also an example of a spring scale. When you step onto it, the springs inside the device are compressed, and move the circular dial with the weight inscriptions the amount proportional to the force your mass applies on the springs.