A Layman’s Guide to How a Sling Psychrometer Works

‘Psychrometer’ is a Greek term, which means a ‘cold measurer’.

Weather prediction is a tricky affair. So while you may come across certain individuals who can precisely tell whether it is going to rain or not simply by flicking their tongues to taste the air, or twitching their nostrils to smell it, others like us who are less endowed have to rely on the use of special instruments of measurement to make such predictions.

The sling psychrometer is one such innovative instrument, which helps us measure the levels of humidity in the air. It has a simple design, and is accurate enough to be used for predicting weather patterns.

In the following sections, we shall take a closer look at the sling psychrometer, and study its working.

What is a Sling Psychrometer?

For measuring the relative humidity in the air, an instrument known as a hygrometer is used. Of the several different types of hygrometers available for use, the sling psychrometer is the simplest, both in terms of design and ease-of-use.

It gets its name from the fact that this instrument comprises a chain/handle on one end, which has to be used to swing the two thermometers mounted on its frame around in circles to generate air flow.

This process allows the device to measure a temperature difference, which is directly proportional to the humidity in the air. Thus, the user is able to determine the value of humidity with an appreciable level of accuracy.

Sir John Leslie (1776-1832), a reputed meteorologist of his time, is credited with the invention of the sling psychrometer. The term ‘psychrometer’, however, was first used in the year 1818 by German inventor Ernst Ferdinand August.

Towards the end of the 19th century, German meteorologist and physician Adolph Richard Assmann (1845-1918) modified the design, and introduced a type of wet-dry bulb psychrometer with improved accuracy. This device, which later came to be known as Assmann’s psychrometer, worked on the same principle as the sling psychrometer, but instead of needing to be swung around, it used a spring-operated fan to generate the required air flow.

This instrument works on the principle of evaporation of water.

When water on a surface evaporates, it extracts a significant amount of heat from it, cooling the surface down. This is how sweat is able to cool down our body and skin when it gets hot.

However, air can only hold a limited amount of water, after which it becomes saturated. This can be observed in beaches and coastal regions, where, since the air is humid, the sweat from our bodies doesn’t evaporate easily.

The psychrometer is designed to make use of both these facts, to help us measure the humidity of air.

The psychrometer is the simplest type of hygrometer. Its design comprises two thermometers which are mounted securely on a platform. 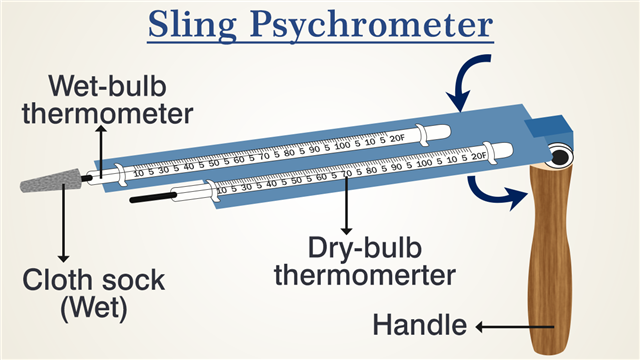 A chain/handle is located on the end of the platform opposite the thermometer bulbs. It is used to sling the device around in circular motions.

The sling psychrometer works by allowing the water soaked up by the cloth wick/sock covering the wet-bulb thermometer to get evaporated into the air. To assist in this process, the handle/chain provided at the other end is used to whirl the device around. This whirling action generates air flow, and enables the wick/sock to come in contact with higher quantity of air, thus allowing evaporation to take place more effectively.

As mentioned earlier, water evaporation leads to a drop in temperature. This is measured by the wet-bulb thermometer.

At the same time, the dry-bulb thermometer provides the original reference temperature reading. Taking the difference between these two values, one can obtain the exact drop in temperature.

This temperature drop will be directly proportional to the amount of water that gets evaporated into the air. If the surrounding air is relatively dry, more moisture will evaporate into it, and as a result, the measured drop in temperature will be greater. Thus, more temperature drop indicates lower humidity levels.

Step 1: Pre-preparation
Before using the psychrometer, it is advisable to perform an initial pre-preparation step, to ensure that you get accurate readings out of it. Basically you have to ensure that both, the thermometers on the device are displaying the same initial reading, so that the measurement commences from the same starting point. A good way to do this is to shake the psychrometer rapidly for about a minute.

Step 3: Whirl the Psychrometer
Once you have readied your instrument by following the steps given above, you can start using it. You have to swing it around in circles for approximately a minute to allow the water from the wick to get evaporated into the surrounding air, and thus cool the wet-bulb thermometer.

Step 4: Take the Readings
After swinging it for a minute, note down the readings from both the thermometers, starting first with the wet one.

Note: You can repeat the above procedure a few times and take the average of the results, to obtain a more accurate humidity value.

In conclusion, a psychrometer is a simple and easy-to-use device, which allows us to measure the relative humidity in the air around us. It can be purchased from the market or even built at home itself by using two commercially available thermometers.