Halogens are some of the most volatile and reactive elements found in nature. Their industrial uses far outweigh their toxic nature though. This ScienceStruck article explores some of their natural properties. 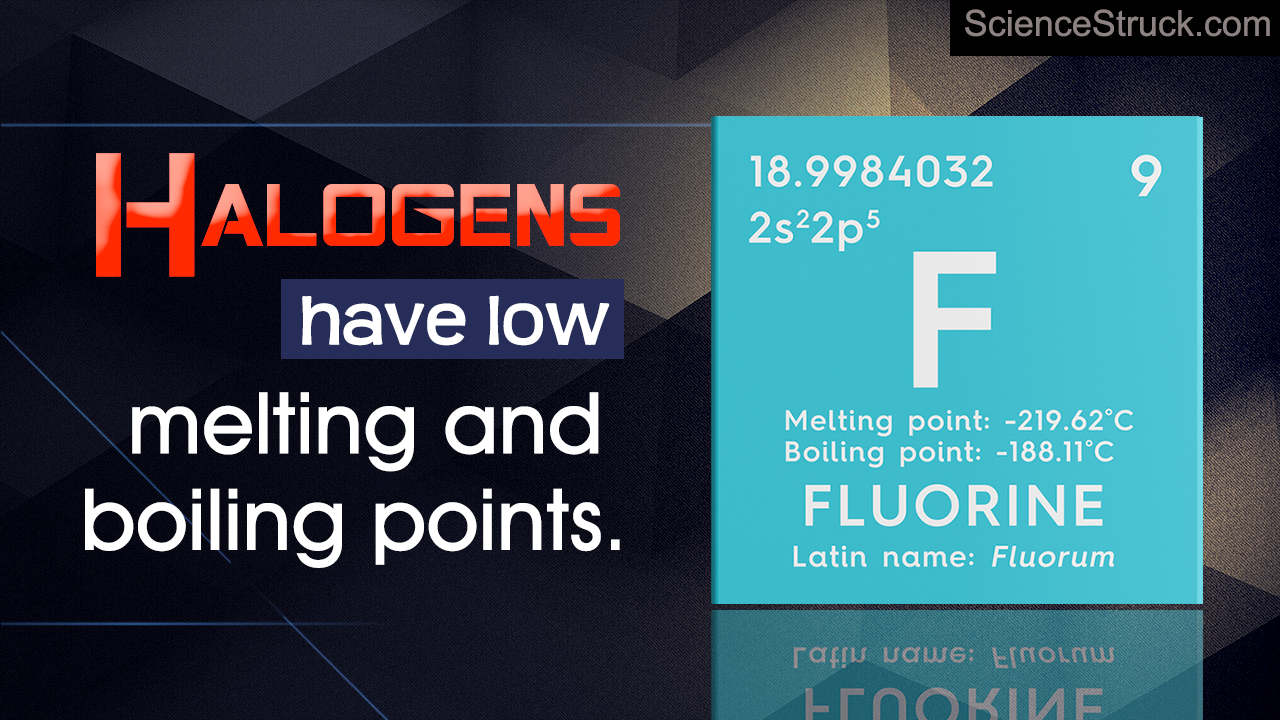 Halogens are some of the most volatile and reactive elements found in nature. Their industrial uses far outweigh their toxic nature though. This ScienceStruck article explores some of their natural properties.

Halogens are a group of non-metallic elements that are placed in Group 17 of the Periodic Table. There are 5 elements that are considered to be a part of this group. These elements are Fluorine (F), Chlorine (Cl), Bromine (Br), Iodine (I), and Astatine (At). Being members of the same elemental group, they exhibit a lot of similar properties, but there are a few differences as well. The term halogens loosely implies ‘salt former’, and compounds that contain them are commonly referred to as salts.

If you are considering the physical forms in which these elements are present, you will find a great degree of variation. Chlorine and fluorine are primarily gases. Iodine is found in solid forms, and bromine is one of the two elements that are present in the liquid state at room temperature (the other one being mercury.) Astatine is also present in the solid state, but since it is highly radioactive it has been extremely difficult to observe its properties. There are 7 electrons present in the outer shell of halogens. As a result they have an oxidation number of -1, which makes them very volatile elements.

Halogens are known to have a very high degree of electron affinity. As a result, their ability to gain electrons is very high. This fact makes them a very reactive group of elements, and many believe that these are the most reactive family of elements found in nature.

Low Dissociation Energy
Along with high electron affinities, they have low dissociation energies. This implies that they can easily break up or dissociate into atoms and then combine with other substances. Both these properties, make this elemental family highly reactive and volatile, especially with alkali metals and alkaline earths. Fluorine is considered to be one of the most reactive elements, and can also be toxic and highly corrosive.

Diatomicity
In their purest form, halogens are always found to be diatomic in nature. This implies that their molecules exist with two atoms each. The strongest form of chemical bonds that can exist between two substances is an ionic bond. When halogens combine or react with metals, they form ionic bonds. As a result of these reactions, these elements become anions, or negatively charged ions. Owing to their high reactivity, these are never found in a pure form in the nature. They must be extracted from their sources, using proper methods and techniques.

Appearance-wise fluorine exists as a pale yellow gas that is poisonous in nature, while chlorine too is poisonous, but exists as a pale green-colored gas. Iodine is commonly found as a black shiny piece of solid, and upon heating, it forms a violet vapor. Lastly, bromine is a brownish liquid, which is extremely volatile in nature and is also considered toxic.

Diatomicity
At room temperature, halogens are diatomic in nature, as has already been mentioned earlier. Also, as you descend the periodic table, you will find that the melting point, the boiling point, the atomic radii, and the ionic radii all increase in each subsequent element.

Here are some more properties that you may find useful and informative.

The uses of halogens are manifold for industrial purposes. Out of all the families of elements found in the table, this family is possibly one of the most important. Due to the properties exhibited by them, here are some purposes that they are generally used for oxidizing agents, etching glass, chlorinating drinking water, manufacturing insecticides, bleaching wood pulp for making paper, and as an oxidant in matches and fireworks.