What is Graded Bedding?

Graded bedding is a sedimentary structure in which there is an upward gradation from coarser to finer material, caused by the deposition of a heterogeneous suspension of particles. This article explains its definition as well as the actual process.

Home / Uncategorized / What is Graded Bedding?

Graded bedding is a sedimentary structure in which there is an upward gradation from coarser to finer material, caused by the deposition of a heterogeneous suspension of particles. This article explains its definition as well as the actual process. 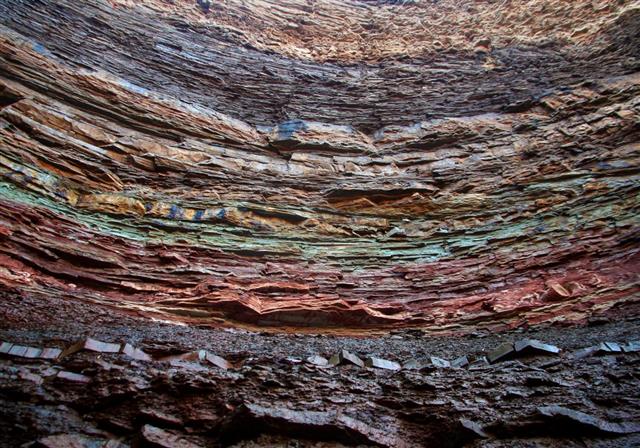 Geologically, in a terrestrial environment, graded bedding is also referred to as normal bedding. It is a systematic change in nature, wherein, from the base to the top, a progressive upward gradation of fragments, sediments, or grains are coarsened into finer compositions. Usually in sedimentary rock formation, the layers which are formed show a coherent grain size. The thickness and coarseness may remain the same throughout.

In the natural degradation process, it is seen that the beds with large particles initially remain at the base, and then gradually move towards the top, where smaller particles are settled. However, if you consider its inverse process, it is unlikely and totally uncommon. The fragments of grains or debris settling in the reverse order is rare. Even then, in eolian ripples, this characteristic is broadly observed.

Graded bedding in sedimentary rocks technically means a configuration of every strata that exhibits gradation in grain size coursing from below to above, i.e., from heavy deposits to finer particles. Over a passing period, these beddings mostly typify deposition environment, which are known to decrease in energy during transportation. This type of action generally occurs in turbidity currents or on turbid strata. These currents are normally originated between the slopes of the deep sea basins and continental shelves. Here, first the strong and heavy coarse currents deposit the sediments, which are later followed by finer sedimentary particles.

A graded bedding is formed when an exorbitant heap of sedimentary grains on the seabed or lake floor abruptly slouches into a steep edge or a canyon. Due to this massive landslide, all the sediments fall off and get mixed with water. This mechanism creates a slurry of grains and particles, which flows down the sloping bottom. As the bottom starts flattening out, the flow eventually becomes slow. Here, the role of gravity is fundamental. As the slurry reaches the plain of the sea basin, gravity stops the acceleration of the mixture, and hence, the process gets slow. Most of the uncouth sediments are deposited first, and then progressively, the finer particles keep getting deposited. It goes on till the area displays a normal sedimentation all over again. This is also where the definition of a turbid strata is comprehended. (A mixture of water-sediments flowing in a cloudy form).

Geologists have dedicated a large chunk of their time and energy in studying this natural and graceful process. Most of their geological studies claim that, decelerating flow and graded bedding are no unique feature of deep sea sediments, but in those other instances, the association of the graded beds with other sediments is markedly different (mud-cracks in sediments, wave ripples in shelf deposits).