Important Facts About the Stationary Front (With Labeled Diagram)

The movement of winds are a crucial factor in determining the temperature and pressure zones on the surface of the Earth. This ScienceStruck post gathers some facts and features on the formation of stationary front and the weather conditions associated with it.

The movement of winds are a crucial factor in determining the temperature and pressure zones on the surface of the Earth. This ScienceStruck post gathers some facts and features on the formation of stationary front and the weather conditions associated with it.

The Visual Flight Rules or VFR flights are never to be made across a stationary front because of the unpredictability of the weather conditions and location of the front. On the other hand, Instrument Flight Rules, or IFR flights can be undertaken as the directions are given by a centralized control unit.

A condition where both the masses of air do not advance into each other gives rise to the formation of a stationary front. This is an interesting natural occurrence and has some facts and features associated to it. Let’s take a look at each one of them.

● Stationary fronts are said to be formed when a polar air mass loses its own characteristics and stops flowing in a particular direction.

● Both the warm and cold fronts, if not moving with enough speed or strength to take over the other, shall lead to the formation of a stationary frontal zone. The front persists until one of the two air masses grow stronger or another wind mass directs a change.

● The climatic conditions at these fronts are similar to those of the warm fronts in that zone. The air from the warm mass rises up at the frontal surface and forms clouds above the frontal zone.

● The direction of the air blowing at the higher altitudes with respect to the weather front decides whether it shall continue to advance or stall. When the direction of flow of the upper surface of the wind is parallel to the boundary of the two air masses, then the front stalls and forms a stationary front.

● The warm and cold air masses do not move relatively into each other due to the opposing forces being exerted by the air masses of different densities. The front as a whole can move back and forth in the region they are formed for miles in one day (also called quasi-stationary front).

● One can easily notice the considerable change in weather while traveling across a stationary front. The change in the direction and temperature of the winds is obvious to the traveler.

● The period of time during which a stationary front is formed over a region, a cloudy weather pertains. There are chances of snowfall if the pressure in that region is low. 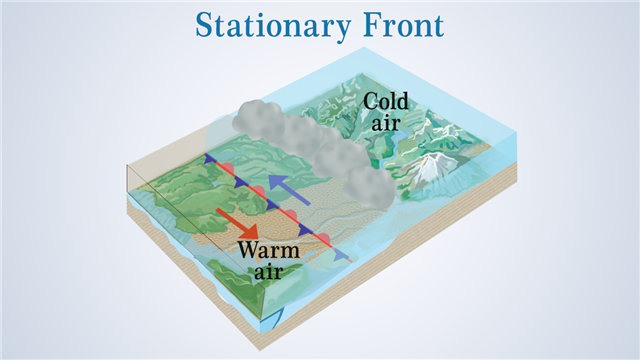 ● If the stationary fronts remain stationary for more than a week’s time or so, then they may give rise to a storm by developing into a low pressure zone.

● When cyclones move across the stationary frontal zone, they can cause flooding along the frontal surface as they tend to discharge the precipitation in that area.

Stationary fronts start to distort under two conditions. Either one of the air mass starts advancing towards the other to replace it, or maybe the flow of the wind at the surface has again gained a direction that’s relatively perpendicular to the surface of the front. When the front dissipates, so does the cloudy weather and the stormy conditions that were formed. 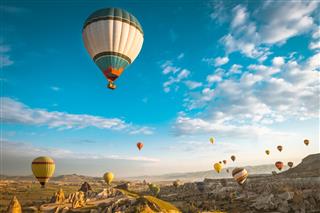 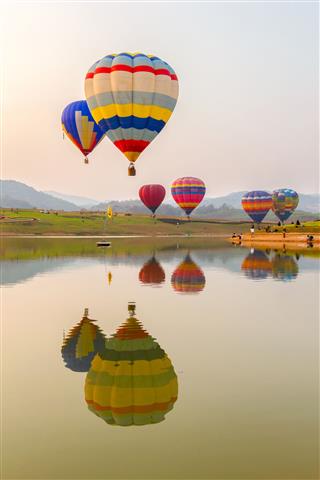