Understanding the Working Principle and Uses of a Dry Cell Battery

A dry cell battery is a type of chemical battery that uses an electrolyte, which is in the immobilized state. The electrolyte in this cell battery contains very little moisture to allow the passage of current through it. This ScienceStruck post provides the history, definition, composition, uses, and recycling process of the dry cell battery.

A dry cell battery is a type of chemical battery that uses an electrolyte, which is in the immobilized state. The electrolyte in this cell battery contains very little moisture to allow the passage of current through it. This ScienceStruck post provides the history, definition, composition, uses, and recycling process of the dry cell battery. 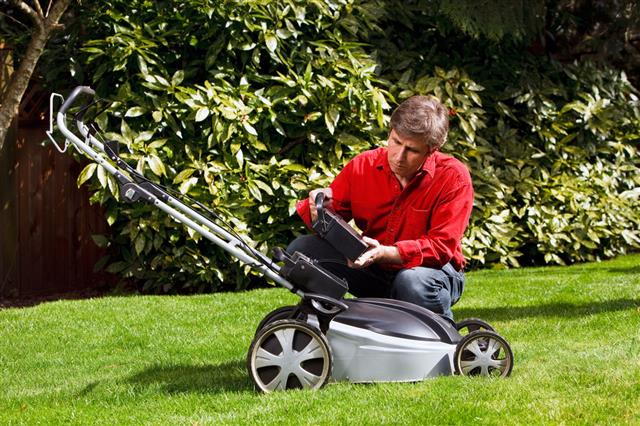 Dry cell battery was being developed in the year 1887 by a scientist named Karl Gassner of German origin. This device was later patented in the year 1982.

Before we begin with understanding the composition and working of a dry cell battery, it is important to understand what a battery is. A battery is a device or an instrument that yields electricity by undergoing certain chemical reactions.

How Does a Dry Cell Battery Work?

The role of any battery is to convert chemical energy to electrical energy. Dry cell battery is a voltage-producing battery, containing the electrolyte chemical in the form of a thick paste. It produces voltage of about 1.5 volts. According to science, an electrode is a conductor used in a battery to run the circuit. It can have positive or negative charge. 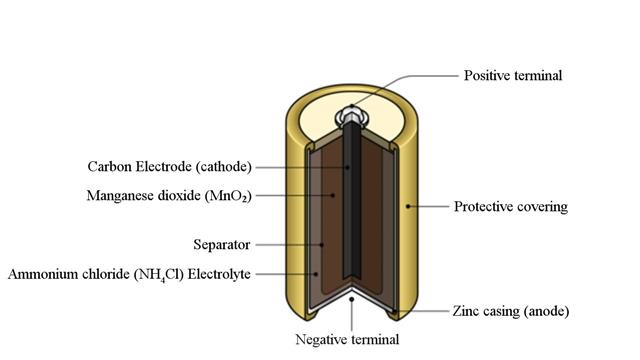 Diagram of a Dry Cell Battery

Now that we know about the structure and parts of the dry cell battery, let us understand its working. Every portion of the battery device has chemical reactions occurring in it. While a reduction reaction occurs at the carbon electrode, oxidation occurs at the zinc casing, which is the anode. The chemical reactions that define the entire energy generation process are as follows:

The ammonium ion from ammonium chloride reacts with two electrons to produce ammonia and hydrogen gas.

The manganese dioxide near the cathode reacts with the hydrogen gas liberated to form Manganese(III) oxide and water.

Combining equation I and II we get,

The half-reaction occurring at the zinc anode is:

Combining all the above equations we get,

Due to these reactions, chemical energy gets converted into electrical energy. This energy then flows from the battery to the connected device through the outer circuit.

Note:
1) Zinc chloride can be used as a substitute to ammonium chloride.
2) Carbon is sometimes used as an addition to manganese dioxide.

Dry cell battery is available in a variety of sizes such as AA, AAA, C, D, and 9 volts. Its use depends primarily on its size. While the small-sized batteries are used for watches or calculators, the comparatively bigger-sized ones are used in radios and flashlights. Besides the commonly used zinc-carbon battery, other examples of dry cell batteries are PP3 batteries (also known as transistor radio battery), Lithium-Ion, Nickel/Cadmium, and Nickel Metal Hydride batteries.

Advantages of a Dry Cell Battery

➢ They have lower prices as compared to the wet cell batteries.

➢ The electrolyte being a thick paste is free from movement. Thus, these batteries last longer.

➢ Their most important advantage is their small size and compact shape. This makes them portable and apt for small-sized devices.

➢ They do not contain liquid electrolytes. This makes them have lighter weights than their wet cell counterparts.

➢ They do not pose any threat to the environment as they do not contain any substance having a corrosive nature.

Dry cell batteries are of primary and secondary types. While the primary ones cannot be replenished by charging, the secondary can be charged. Thus, the primary must be disposed off when they cease to work. Although they are not known to be hazardous to the nature, their disposal must be done in the right way. The alkaline batteries can be disposed along with the regular trash. Another very pertinent solution to this problem can be resorting to the use of secondary dry cell batteries. This will allow recharging and reusing the batteries, thus, reducing the junk.

Although dry batteries have relatively low charge-producing capacity, they find a number of uses in smaller devices requiring less power. And as the proverb goes In unity lies strength, a number of dry cell batteries coupled together provide larger amount of voltage.