Examples That Explain the Concept and Meaning of Capillary Action

Capillary action allows a liquid to rise upwards against the force of gravity. It is an important natural phenomenon on which is the functioning principle of several natural and artificial processes. In this ScienceStruck post, we shall find out what capillary action is, and take a look at some of its important examples. 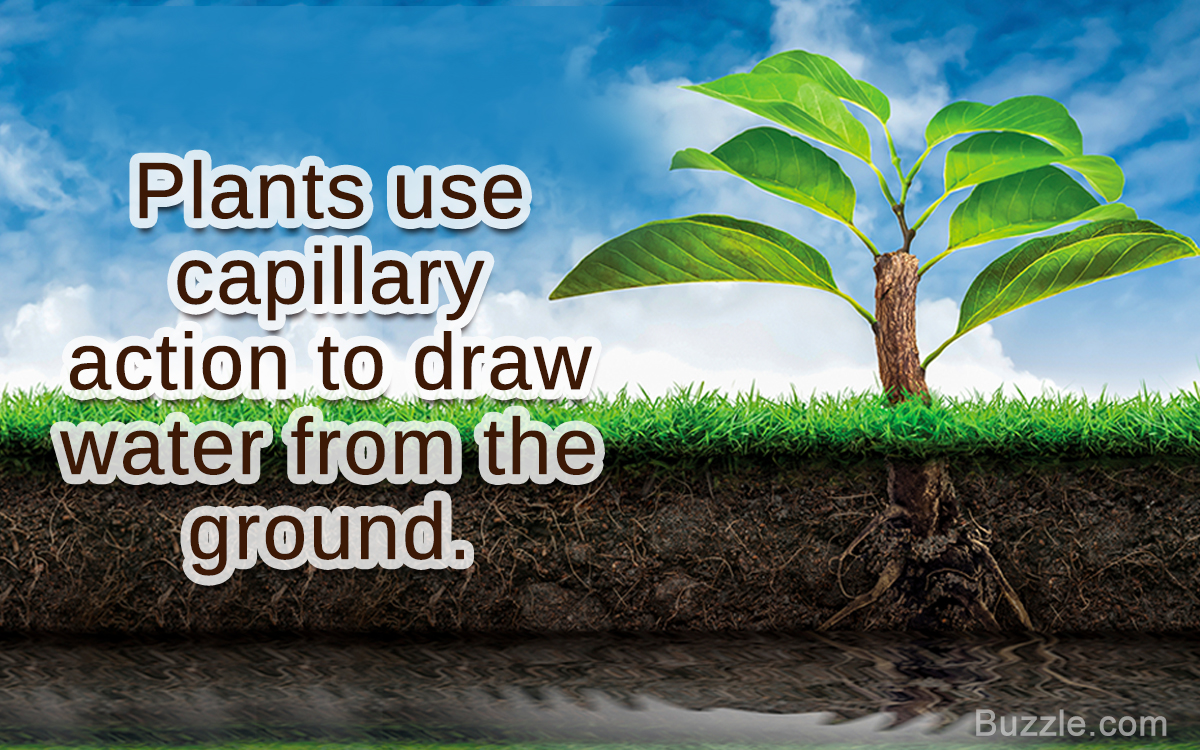 Capillary action allows a liquid to rise upwards against the force of gravity. It is an important natural phenomenon on which is the functioning principle of several natural and artificial processes. In this ScienceStruck post, we shall find out what capillary action is, and take a look at some of its important examples.

When we lift something from the ground, we work against gravity. We are able to do so because we are mobile creatures with bones and muscles that produce enough mechanical force to overcome the gravitational pull. So, for instance, if we want to drink water, we just collect it in a vessel and lift it up to our mouths.

But what about non-mobile creatures such as the tress and plants? Without being capable of any form of motion, how are they able to overcome gravity and lift water to various parts in their system? The answer lies in capillary action.

Capillary action is an interesting phenomenon that helps plants raise water without requiring motion. But that isn’t all. Capillary action also has many other applications in physics, chemistry, as well as in everyday life. In the following sections, we shall try to understand capillary action and its working. We shall also take a look at some of its common examples.

Capillary action is defined as the motion of liquids inside very narrow spaces without the assistance of, and most of the time in opposition to, external forces such as gravity. It occurs because of the molecular force of attraction that exists between a liquid and its surrounding solid surfaces.

From the above section, it is clear that capillary action is the result of surface tension and adhesion. Lets discuss what each of these terms means.

Surface tension results in the formation of a strongly bonded layer of molecules on the surface of a liquid, which makes it more difficult for an object to move freely as compared to when it is completely submersed.

Molecules in a liquid experience two types of inter-molecular attractive forces. When the attractive force is between like molecules, i.e., between the molecules of a liquid, it is termed as cohesion. The phenomenon of surface tension, discussed above, is an example of cohesive forces between the molecules at the surface of a liquid and those present in the rest of it. Cohesion is also the reason why the molecules in a drop of water are held together giving it its characteristic shape.

The other type of attractive force is the one seen between unlike molecules, i.e., between the molecules of a liquid and those of a solid. These forces are known as adhesive forces.

For example, when a solid surface, such as a glass tube, is placed on the surface of water, the phenomenon of adhesion causes the water molecules to be attracted by the glass molecules. In case of a narrow tube, adhesive forces increase in comparison to the cohesive forces acting between the water molecules on the surface, which causes the water to rise inside the tube. This phenomenon is known as capillary action. It is interesting to note that the narrower the tube is, the higher the water rises inside it due to capillary action.

The following is a simple experiment which you can perform at home that demonstrates the capillary action of water.

◆ A cup filled with water
◆ An empty cup
◆ Paper towels

Twist together a couple of paper towels until it forms something similar to a piece of rope. This will act as the conduit that transfers water from one cup to another. Place one end of the twisted paper towel in the cup filled with water, and the other into the empty cup.

There are several examples of capillary action in nature as well as in man-made applications. The following is a list a few of the common ones from among them.

Paper towels have small pores present in them. When they come in contact with a liquid, capillary action allows the liquid to move up into the towel, thus allowing the paper towels to soak the liquid.

Sponges have more pores in them as compared to paper towels. These pores act as minute capillaries, causing them to absorb a large quantity of liquids.

If you look closely at the nib of a fountain pen, you will notice that it is split in two. Through this narrow slit, a thin line of ink moves out of the reservoir, allowing you to write on a paper. The movement of the ink is partly due to the force of gravity acting on the ink pulling it downwards, and partly due to capillary action.

Capillary action in plants is one of the most essential processes which helps them to survive. The roots of plants draw water via capillary action from the soil, and thus, supply it to various parts of the plant including the stems, branches, and leaves.

Thus, capillary action is a property of liquids, wherein the liquids are able to travel through narrow spaces or capillaries in solids, without the assistance of any external force. It is an important natural phenomenon which has several application in nature as well as in man-made applications.