Simple Examples to Understand the Calculation of Young’s Modulus

Young's modulus is the ratio of tensile stress to tensile strain. This ScienceStruck post explains how to calculate Young's modulus, and its relation to temperature changes and Hooke's Law. 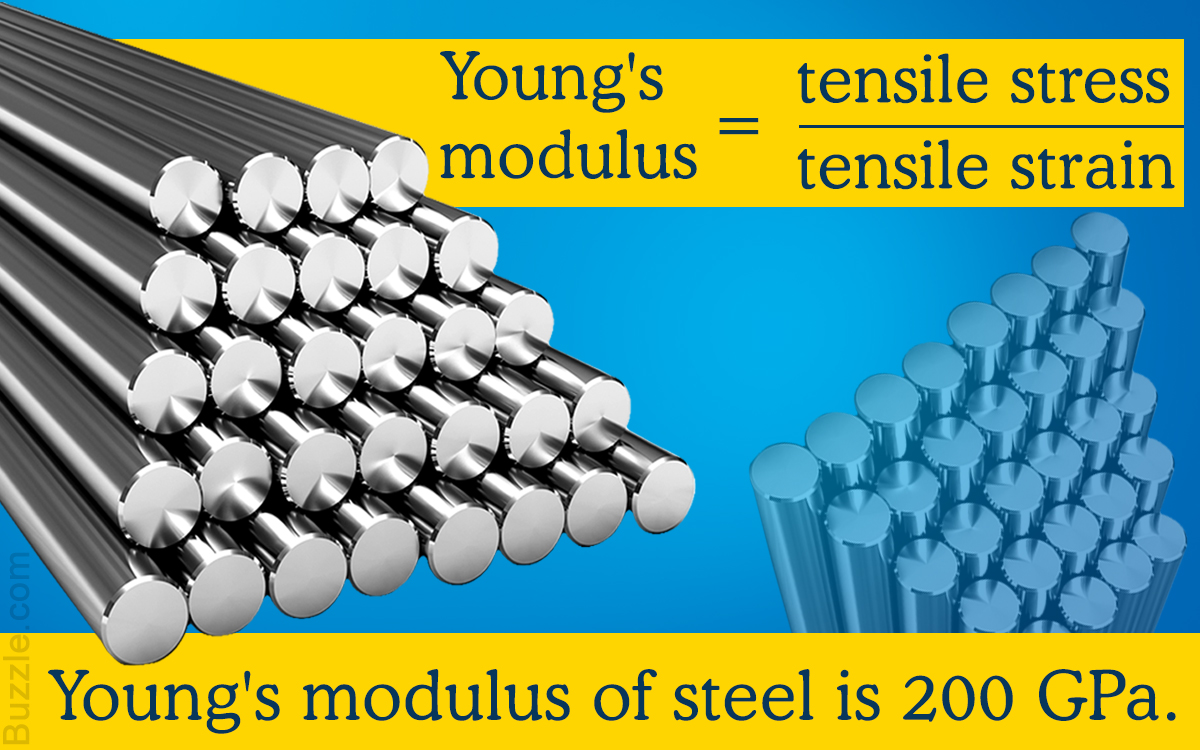 Young’s modulus is the ratio of tensile stress to tensile strain. This ScienceStruck post explains how to calculate Young’s modulus, and its relation to temperature changes and Hooke’s Law.

Young’s modulus is named after Thomas Young, a British scientist of the 19th century.

The property of a material of returning to its original shape and size after being put through elongation or compression is called elasticity in physics. In other words, it is the property of a material to resist deformation. This is contrary to popular belief that if a material can be stretched more than others, then it is elastic. So for this reason, a metal rod is more elastic than rubber. A metal rod can better regain its previous shape after the deforming forces are removed as compared to rubber.

✦ When a body is compressed or elongated by applying a force, there arise internal restoring forces in the body which oppose this change in its shape.

✦ The internal restoring force per unit cross-sectional area of a body is defined as stress.

✦ It is equal to the external deforming force per unit area applied to a body.

✦ Stress is given by the formula:

✦ SI Unit of stress = unit of force/unit of area
= Newton/m2 or Pascal
Thus, unit of stress is same as the unit of pressure.

✦ When a body undergoes elongation or compression, there occurs a change in the shape of the body.

✦ The change in shape of a body because of an external deforming force is called strain.

✦ Strain is, thus, a ratio of change in length to the original length.

✦ Strain is given by the formula:

✦ Unit of strain: Strain has no units; it is a dimensionless quantity as it is a ratio of two lengths measured in the same unit.

✦ Young’s modulus is the modulus of tensile elasticity.

✦ Tensile elasticity indicates the ability of a body to undergo linear deformation.

✦ A body undergoes linear deformation when it is stretched or compressed along a longitudinal axis. Young’s modulus is given by the ratio of tensile stress to tensile strain.

✦ SI unit of Young’s Modulus: unit of stress/unit of strain.

VARIATION OF YOUNG’S MODULUS WITH TEMPERATURE

When the temperature of a material changes, there is a corresponding change in the atomic thermal vibrations of the material. For e.g. When there is an increase in the temperature, the atomic thermal vibrations of the material also increase. So there will be a corresponding change in the internal restoring forces of a material when it is subjected to stress. The volume of material also changes when temperature varies. Hence, the strain exhibited by a material will also change. Thus, as the Young’s modulus is the ratio of tensile stress to tensile strain, it will also vary with respect to temperature. Wachtman has proposed an empirical formula that shows the dependency of Young’s modulus on temperature.

Hooke’s Law states that the stretching that a spring undergoes is proportional to the force applied to it.

Where F is the force applied, X is the displacement (extension or compression) produced in the spring, and k is the spring factor that is characteristic to the spring. This law holds true within the elastic limit.

Note that most materials behave like springs when undergoing linear deformation. The basic difference in this context being that unlike springs, most materials possess an area that must be taken into consideration. Thus, in the above law, we can replace force with stress and displacement of the spring with strain and, thus, rewrite the law as:

Thus, we can conclude that Young’s modulus is the spring constant in Hooke’s Law where length and cross-sectional area are 1. The displacement is considered to be longitudinal.