2004 Boxing Day Tsunami: Important Facts and its Impact on The World

26th December, 2004. This day shook the world, as the waters of the Indian Ocean wrecked havoc on the Asian subcontinent. We are referring to the Indian Ocean Tsunami that occurred in 2004, which permanently changed the fate of millions on the planet. This article describes the horror that occurred on that day and tells you how and why it was caused. It is also our tribute to the departed.

Home / Uncategorized / 2004 Boxing Day Tsunami: Important Facts and its Impact on The World

26th December, 2004. This day shook the world, as the waters of the Indian Ocean wrecked havoc on the Asian subcontinent. We are referring to the Indian Ocean Tsunami that occurred in 2004, which permanently changed the fate of millions on the planet. This article describes the horror that occurred on that day and tells you how and why it was caused. It is also our tribute to the departed.

Do You Know?
At least fourteen nations were the worst-affected, and the entire toll was pegged at more than 2,00,000 losses across these nations. The country that suffered the worst death toll was Indonesia, and others like India, Thailand, and Sri Lanka too, suffered heavily.

It is said that certain events that occurred before the Indian Ocean Tsunami should have been taken as serious warnings of an approaching natural calamity. The Sumatra Earthquake that occurred in 2002 is believed to be a fore-shock of the actual 2004 disaster.

The Indian Ocean Tsunami that occurred in 2004 is considered as one of the deadliest natural disasters in history, on the basis of the destruction and human casualties. It was caused by an undersea mega-thrust earthquake called the Sumatra-Andaman Earthquake, which measured about 9.1 to 9.3 in magnitude on the Richter scale. It was also the third-largest earthquake in recorded history on our planet. The oceanic disaster caused, is also referred to by names such as the Boxing Day Tsunami, South Asian Tsunami, or the Indonesian Tsunami.

The disaster started with the subduction of the Indian tectonic plate beneath the Myanmar plate, resulting into the deadly earthquake with its epicenter being near Indonesia. As the thrusting took place, an enormous volume of sea water was displaced and as it neared the shoreline of various countries, the tsunami waves reached a height of more than 30 feet. Read the following sections to gain more information about the 2004 Indian Ocean Tsunami.

What Caused The Boxing Day Tsunami in 2004?

The image given above illustrates the formation of a tsunami after an earthquake takes place under the ocean bed. In case of the 2004 Tsunami, a megathrust earthquake took place due to subduction, which actually caused a part of seabed to be lifted. The resulting fracturing was so large that an enormous amount of water was displaced and small waves started rippling out from above the epicenter. These waves had a low amplitude but high frequency and hence traveled at great speeds. On coming close to the shores of Southeast Asian countries, and the coast of India and Sri Lanka, these waves experienced a decrease in their speed, but at the same time, their amplitude increased. At the time the tsunami crashed, the average height of the waves was more than 10 meters.

When the Sumatra-Andaman earthquake occurred, the vibrations were such, that a tremendous amount of energy was released. At least USD 14 billion (in terms of the 2004 dollar value) were donated from around the world for relief and aid. The tsunami completely destroyed coastal areas of the nearby and neighboring countries.

The energy released by this disaster was equivalent to about 1.1×1017joules, which is about more than 1500 times the energy released after the detonation of the Hiroshima atomic bomb. Considering the tsunami that occurred just after the earthquake, the waves reached as far as the eastern coast of Africa, where some casualties were reported.

Pictures of the Indian Ocean Tsunami, 2004

This slideshow includes images that depict the intensity of damage caused (both physical and emotional), along with the extensive relief efforts taken, and also includes some tsunami memorials. 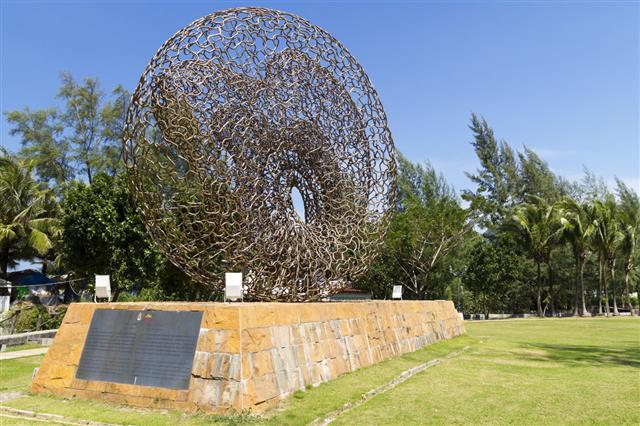 A Mournful Tribute to the 2004 Tsunami Victims

For thousands of innocent people, everything was lost because of one giant wall of water. Recovering was difficult and so was getting on with life. The raging waves of the 2004 Tsunami took the lives of many. Many were killed, many lost their loved ones, so many were left homeless, and many more were left in grief. In just a few seconds, so much was lost. The ones who survived were left with only tears and the memories of their loved ones.

It has been a decade since the Asiatic subcontinent bore the brunt of a deadly earthquake and the resulting tsunami that destroyed several miles of coastal areas, robbing all living creatures of their livelihood and peaceful existence. Houses damaged or ripped apart, sea water intrusions several kilometers inland, destroyed trees and landscape elements, lives lost, property destroyed … the list of effects is endless. So many have died that the exact number is still not known, and some of the missing ones have still not been found.

After losing so much, how does one live? Though there is no exact answer to this, the only way out is to find a new purpose for living. Here we pay a tribute to everyone who suffered during the Indian Ocean tsunami in 2004. The ones who departed, and those who went missing will never be forgotten. They will be in our prayers. We honor the ones who survived, for they showed the courage to rise again. We salute those who contributed in providing aid and relief to the survivors. But the truth remains that no one will ever be able to recover completely from the losses. That young child’s mother who lost her life will never return; or that fisherman who sacrificed his life in order to protect his wife and children, will never come back.

It is only sad how the giant Tsunami waves took so many lives. If the prior warnings would have been heeded, many could have been saved from the pain and suffering. Studies indicate that one of the biggest reasons behind the Tsunami was the destruction of our environment that’s been going on for years. It’s high time we realize that the only way to try to prevent such natural disasters, is to safeguard our planet. The only way to protect ourselves is to protect Mother Earth.

Such was the intensity of this catastrophe that only a few managed to survive the aftermath. The lost shelter, and the lack of food and clean water, only added to the mayhem.

We will never be able to forget the disaster of 26th December, 2004. The tall and angry waves lashed out of the deep chasms of the Indian Ocean and swallowed several homes. May the souls of the departed rest in peace.