History and Working Principle of the Anemometer

An anemometer is a device that measures the speed of wind. Its design and working principle is fairly simple and hasn't changed much ever since 1846. This ScienceStruck post provides a brief history of the device along with its working principle.

Home / Uncategorized / History and Working Principle of the Anemometer 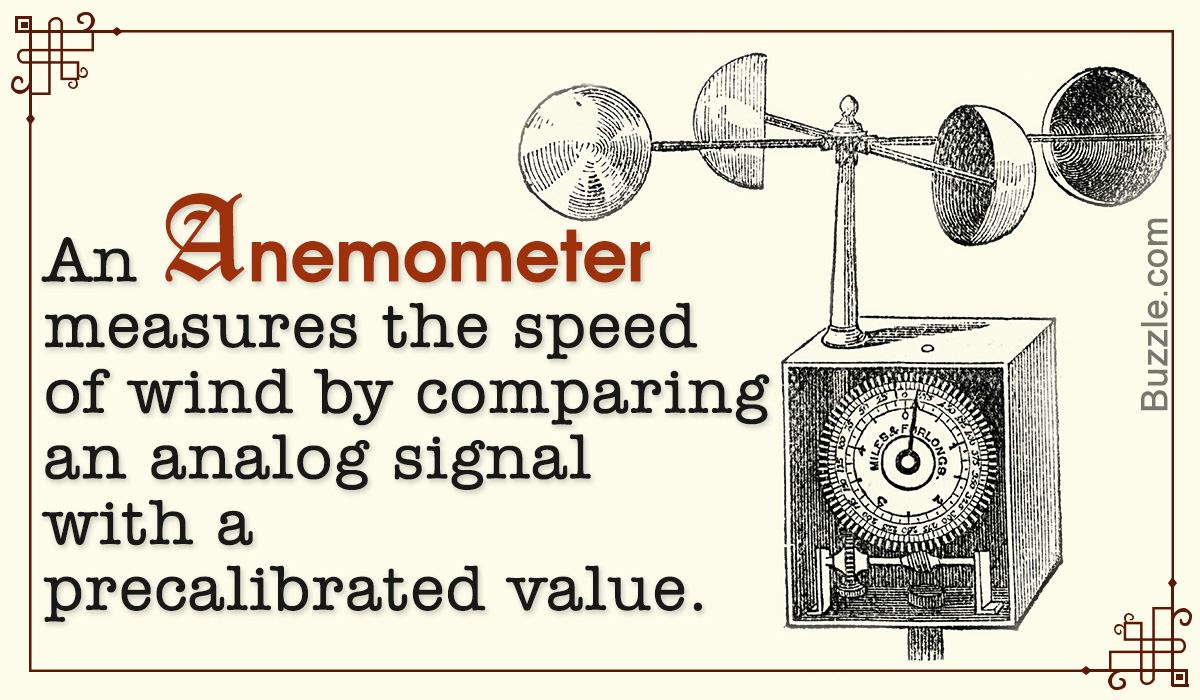 An anemometer is a device that measures the speed of wind. Its design and working principle is fairly simple and hasn’t changed much ever since 1846. This ScienceStruck post provides a brief history of the device along with its working principle.

The term ‘anemometer’ is derived from the Greek word anemos, meaning wind. Depending on the construction of an anemometer, it can measure an analog signal, like a mechanical movement or an electric current, produced due to the wind. The value of this signal is compared with precalibrated standard values of wind velocity. Thus, the unknown wind speed is measured.

Anemometers are a common sight at meteorological departments and are also used for air speed measurement in aerodynamics. But before we understand its working principle, let us take a brief look at the origins of this device.

▶ Around 1450, Italian artist and architect Leon Battista Alberti put forth the theory of a device to measure wind velocity. He invented a mechanical anemometer by placing a disc perpendicular to the wind direction. The angle of inclination of the disc would indicate the wind velocity.

Much later, around 1664, Englishman Robert Hooke created a similar device and is sometimes, incorrectly credited with having invented an anemometer. In 1708, German philosopher Christian Wolff, or Wolfius, also reinvented the mechanical anemometer that could measure the force of wind.

▶ In 1846, Irish researcher Dr. John Thomas Romney Robinson, of Armagh Observatory, invented the hemispherical cup anemometer that is still seen and used today. A fairly simple design that provides a fairly accurate reading, it consists of a vertical rotating spindle with four arms at the end. Four hemispherical cups are attached to the ends of each horizontal arm. When the wind blows, the cups rotate and subsequently the spindle also rotates. The rotations of the spindle give us the wind speed.

Robinson stated that the cups moved one-third the speed of the wind, and the size of the cup and arm length were immaterial. Empirical evidence later proved this assumption to be wrong. The ‘Anemometer Factor’, which is the ratio of the speed of wind to that of the cups lies between 2 and a little over 3.

▶ By the advent of the 20th century, gradual improvements and enhancements to the existing anemometers resulted in more accurate wind speed readings. In 1935, researchers M. J. Brevoort and U. T. Joyner of the U.S. were able to further improve the existing three cup wind anemometer design by reducing the error percentage.

In 1991, an anemometer that could measure wind velocity was invented by Australian inventor Derek Weston. Until then, a cup anemometer was unable to determine the direction of wind. Geologist Dr. Andreas Pflitsch invented the sonic anemometer in 1994. It determined wind velocity by measuring the decrease or increase in sound waves traveling between two transducers.

A tachometer is an electromechanical device which converts mechanical energy into electrical pulses to give a digital readout of the speed of a motor. A digital anemometer works on the same principle. Spinning cups turn a paddle wheel inside a metal canister under a digital anemometer. Each time the paddle wheel rotates, it breaks a light beam and generates a pulse of current. An electronic circuit times the pulses and uses them to calculate the wind speed.

Other anemometers include windmill anemometer, hot wire anemometer, and laser doppler anemometer. Thus, an anemometer is one of the simplest devices to measure wind velocity. Hope this article helped you in understanding its working principle and gave a glimpse of its history since its invention.