Properties and Uses of Andesite Rock

Andesite is an extrusive igneous rock that has a porphyritic texture. This rock is formed from molten magma, which has medium viscosity. Read this ScienceStruck article to know the facts, origin, formation, and properties of andesite rocks.

Andesite is an extrusive igneous rock that has a porphyritic texture. This rock is formed from molten magma, which has medium viscosity. Read this ScienceStruck article to know the facts, origin, formation, and properties of andesite rocks.

What type of a rock is andesite?

The amount of silica contained in any rock determines its chemical composition. Geologists use this measure to identify rocks and understand their characteristics. While granite is known to be rich and basalt or rhyolite to be poor in their silica content, andesite rock is said to be having silica content, intermediate to these rocks.

The name ‘andesite’ is derived from a mountain range, the Andes in South America. These rocks are formed due to the constant subduction processes that lead to pushing of tectonic plates downward along the continental margins.

Formation of the Andesitic Rocks

Let us now understand the process of formation of andesite rocks. At times, magma crystallizes into rocks and certain minerals get removed from the rock once the process of crystallization is over. This after a certain point of time results in the formation of andesite. In some instances, magma in the molten form moves in the upward direction towards the predominant crust. When molten magma comes in contact with the crustal portion, it tends to melt it. The partial melting of the crust leads to the creation of andesitic magma. The magma that is generated from the above two sources fuses to form these types of rocks.

Where is Andesite Rock Found?

The rock derives its name from Andes mountain ranges, which possess a large number of andesite rocks. Besides this mountain range, the Cordillera mountain range of North and Central America houses these rocks too.

Characteristics and Properties of Andesite Rock

1) It finds its chief uses in the construction and road-making industries for making roadbeds. It is used as a filler or sometimes added as a constituent to various compounds.

2) It is used in making statues and monuments. Besides this, it is used in designing landscapes and gardens.

3) Its resistance to slip makes it very apt to be used in making tiles. 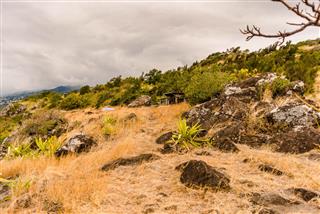