A Comparative Study of Osmolarity Vs. Osmolality Vs. Tonicity

There is a lot of confusion between the terms osmolarity, osmolality, and tonicity, which are incorrectly interchanged. This ScienceStruck post explains these terms by telling you the differences between them along with examples, and how to calculate them.

Home / Uncategorized / A Comparative Study of Osmolarity Vs. Osmolality Vs. Tonicity 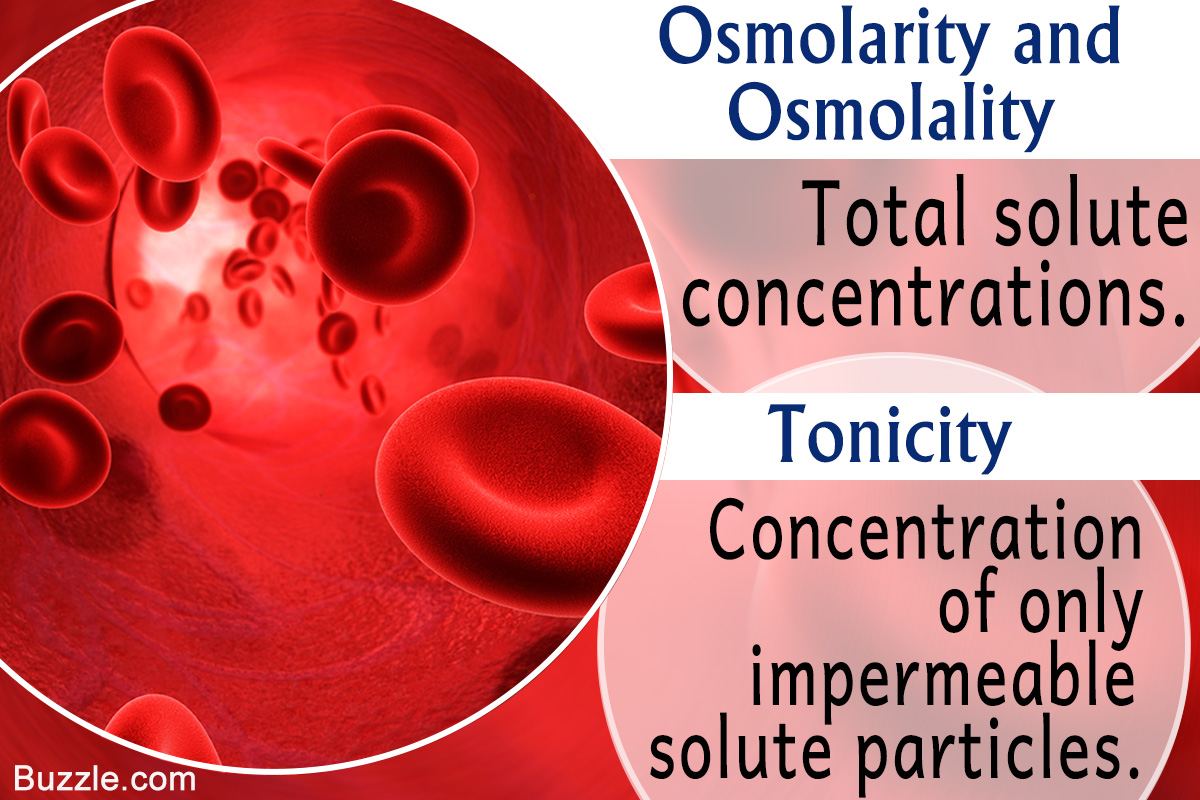 There is a lot of confusion between the terms osmolarity, osmolality, and tonicity, which are incorrectly interchanged. This ScienceStruck post explains these terms by telling you the differences between them along with examples, and how to calculate them.

The terms osmolarity and osmolality can be freely interchanged when dealing with human physiology. The former deals with 1 liter of solution, while the latter involves 1 kilogram of solvent. In the human body, this ‘solution’ is plasma which, being dilute, is almost similar to water, which is the ‘solvent’. Also, 1 liter of water weighs 1 kilogram.

When two solutions of different concentrations are separated by a semipermeable membrane, then the solvent molecules pass from the dilute solution to the concentrated one across the membrane. This happens until both the solutions are of equal concentrations. This process is called osmosis, and examples of membranes across which it can occur are lipid bilayers, polyamide membranes, and even plasma membranes of human cells.

When it occurs in human cells, osmosis can have important repercussions. It can cause red blood cells to swell and burst, called hemolysis, or in other cases, cause them to shrink and contract. However, the human body is equipped with a range of inbuilt mechanisms to prevent such mishaps, and maintain osmotic stability called homeostasis.

To maintain such stability, the body uses a phenomenon called osmotic pressure. It is the minimum pressure that must be applied to prevent the flow of solvent across a semipermeable membrane. Basically, it means that a solution with high osmotic pressure will attract more solvent towards it. This term can be better explained using the concepts of osmolarity and osmolality, which deal with the number of solute particles, while tonicity helps us to understand the effect of such solutes on cells. The difference between osmolarity, osmolality, and tonicity are further explained below.

In general, the formula of osmolarity for a solution with one type of solute is:

Osmolarity is a colligative property, which means that it depends on the number of particles dissolved in solution, and not their weight. Since the volume occupied by both the solute particles and the solvent in solution changes with change in temperature, the osmolarity can be difficult to determine. Its unit is osmol/L or Osm/L.

Based on their osmolarity, solutions can be divided into:

✿ Hyperosmotic: A solution that has a higher number of osmoles per liter than another is said to be hyperosmotic to it.

✿ Hyposmotic: A solution that has a lower number of osmoles per liter than another is said to be hyposmotic to it.

✿ Isosmotic: Two solutions that have the same number of osmoles per liter are said to be isosmotic to each other.

Osmolality is used to display the concentration of an osmotic solution based on the number of particles, with respect to the weight of the solvent. More specifically, it is the number of osmoles in each kilogram of solvent. Thus, it shows the variation between the solute and solvent in a better fashion.

Since the weight of the solvent does not change with temperature, osmolality is preferred over osmolarity in clinical applications, and also because the patient’s fluid volume is more difficult to determine than his weight.

The unit of osmolality is osmol/kg or Osm/kg. Since human blood plasma contains an excess of sodium ions, its osmolality formula is:

Plasma Osmolality* = 2 × sodium level
*When glucose level is in control.

While calculating osmolality, only the weight of the solvent is considered, while in osmolarity, the volume of both the solute and the solvent are taken into account. This is why the value of the latter is slightly lesser than the former. The body fluids are mostly composed of water, and the weight of one liter of water is roughly equal to one kilogram. Therefore, the terms osmolarity and osmolality are freely interchanged in human physiology. The osmolarity and osmolarity of human body fluids is in the range of 270 to 300 mOsm/L or mOsm/kg, respectively.

Tonicity is the osmolality of a solution with reference to a semipermeable membrane. It is the concentration of those solute particles, which cannot pass through, i.e., are impermeable to a given membrane. Thus, tonicity not only depends on the properties of the solute, but it also depends on the properties of the membrane in question. Tonicity is also defined as the relative concentration of a solution outside a cell with respect to the concentration inside it.

When a solution contains a mixture of permeable and impermeable solutes, then tonicity deals with only those solutes that do not pass through the membrane, while the rest that pass through are not considered. Since impermeable sodium ions are the major osmoles in an extracellular fluid, tonicity is effectively equal to the osmolality of all body cells.

Unlike osmolarity or osmolality, tonicity does not have any units. It is calculated by the formula:

Depending on their tonicity, solutions are of three types:

✿ Hypotonic: When the tonicity of the solution outside the membrane is lesser than that inside, the solution is hypotonic. A cell placed in a hypotonic medium will gain water across its plasma membrane and swell up, causing it to burst.

✿ Isotonic: When the tonicity of both solutions is equal to each other, the solutions are said to be isotonic. Cells placed in an isotonic medium will not be damaged in any way.

While osmolarity includes both concentrations, i.e., that of the solutes which cross the membrane and those that don’t, tonicity is only restricted to those that don’t. So, if a solution contains only non-penetrating solutes, then a hyperosmotic solution will also be hypertonic, a hyposmotic one will be hypotonic, and an isosmotic one will be isotonic, with regard to a cell. However, this is not true in other cases.

To conclude, it can be said that while osmolarity and osmolality are concentrations of individual solutions, tonicity deals with the interaction between two solutions across a semipermeable membrane. Tonicity helps understand whether a cell exposed to osmotic pressure will swell, shrink, or remain of the same size.