One of the oldest types of rocks on our planet, metamorphic rocks are mainly formed due to changes in the parameters of temperature and pressure, which act on the parent material. Their study provides us with important data regarding formation of the Earth and the past geological environment. Read this ScienceStruck article to gain extensive information about the main features of these rocks.

One of the oldest types of rocks on our planet, metamorphic rocks are mainly formed due to changes in the parameters of temperature and pressure, which act on the parent material. Their study provides us with important data regarding formation of the Earth and the past geological environment. Read this ScienceStruck article to gain extensive information about the main features of these rocks.

The term metamorphism has a Greek origin, and has been derived from ‘meta’, meaning change and ‘morph’, meaning form. Metamorphic rocks are formed mainly due to changes in pressure and temperature, thereby, transforming the original/parent igneous and/or sedimentary rocks. They are characteristically identified by the presence of typical mineral types or assemblages, along with particular accompanying textures. Based on several types of mineral assemblages and the variation in the degree of temperature and pressure, metamorphic rocks are classified under different metamorphic facies.

Metamorphic facies can be simply defined as the domains, which are characterized by the occurrence of particular metamorphic rocks along with specific progression of index minerals. According to such domains, the degree of metamorphism also varies, and it increases mainly along with rise in both temperature and pressure, as can be referred from the facies graph.

In this type, the metamorphic processes take place due to a combined effect of pressure and temperature increase. The facies included under this category are zeolite, prehnite-pumpellyite, greenschist, amphibolite, and granulite.

This type is characterized by the occurrence of processes mainly due to a drastic increase in pressure, and very less increase in temperature. The facies included under this category are blueschist and eclogite domains of metamorphism.

In this type, increase in temperature plays a major role in forming metamorphic rocks along with very less increase in pressure. The major domains under this category are albite-epidote, hornblende hornfels, pyroxene hornfels, and sanidinite facies.

It occurs very rarely, and is characterized by the impact of celestial bodies like asteroids and meteorites on Earth, accompanied by a sudden increase in temperature and pressure. Rocks formed due to such metamorphism are mainly found near meteor craters.

These rocks are mainly classified on the basis of their texture and arrangement of mineral grains into two main types: Foliated and Non-foliated. Few examples of these types are shown in the following slideshow.

The parent material that has undergone metamorphic changes is called protolith, and this material may be an igneous, sedimentary, or even another metamorphic rock. Metamorphism is also said to be a process that balances or maintains the equilibrium of the rock cycle, which is otherwise changed during the occurrence of an igneous activity.

The parallel arrangement of mineral grains forming flaky layers or planes, along which the rock, that can break easily is called foliation. This term has been derived from the Latin word folium, which means leaf. Flaky and platy minerals such as biotite, muscovite, glacophane, kyanite, chlorite, etc., form these features. Foliation is primarily seen only in zeolite, prehenite-pumpellite, greenshist, amphibolite, and blueschist facies of metamophism. Another term used to describe this feature is called slaty cleavage; it is seen mostly in low-grade metamorphic rocks like slates and phyllites.

When uneven pressure acts on the parent material along with a temperature change, the original minerals are converted to flaky minerals like mica, which further get arranged in the typical parallel form due to differential pressure acting on one side of the rock. This feature occurs only during prograde metamorphism, and it is seen in regions that have undergone orogenic activity, further forming mountain ranges. Consisting of a phyllosilicate (sheet-like) structure, foliation is dominantly seen in schistose rocks and is also present in various gneisses as alternate bands and in tectonites in the form of linear rock fabric, along with lineations.

These features are defined as the parallel alignment of the fabric of a rock where two foliation planes meet. Thus, in simple terms, when two slaty cleavages come together, they form these linear structures. Lineations can be present in the form of stretched and parallel mineral grains like stretched pebbles in conglomerates, crenulations, parting lineations, etc. These structures are mainly formed due to cataclastic or burial metamorphism, though the contribution of temperature-related changes might be present in a few cases. Such linear features are majorly seen in metaconglomerates, fault breccias, metasedimentary rocks, tectonites, etc.

The L-tectonites are characterized by the presence of lineations, and the L-S tectonites show typical shear-deformed arrangement of foliation cleavages, as well as accompanying linear structures. In this case, all the axis lengths of minor aspects like stretched pebbles and mineral grains, if present, are measured. Lineations can be parallel as well as perpendicular to the foliated planes of schistose minerals. Unlike the previously described characteristic, linear features are rarely formed under regional metamorphism, as a temperature change would lead to recrystallization or formation of new minerals, as in the case of low-grade metamorphic rocks.

The parallel arrangement of mineral grains due to a combined effect of temperature and pressure changes is called schistose texture or schistosity. It is a characteristic of foliation planes, and the rocks showing this texture are found under greenschist, amphibolite, and eclogite metamorphic facies.

The alternate arrangement of schistose and granulose (appearance of aggregate of grains) bands that are mostly parallel to each other is called gneissose texture or gneissosity. Such textures are commonly seen in amphibolite, granulite, and greenschist facies of metamorphism, and they indicate medium to high metamorphic rock grade.

In this type, mineral grains are very fine grained, and are arranged in a particular orientation forming slaty texture or slaty cleavage. The rock has undergone low-grade metamorphism, and fine carbonaceous material often forms a major part of its composition. This texture is mainly seen in zeolite and prehnite-pumpellyite facies of metamorphism.

For example: Slate and metamorphic greywackes

This type is similar to the slaty texture, but is characterized by a higher degree of metamorphism and larger mineral grains. Also, the degree of orientation and parallelism is more pronounced than that seen in slates and meta-grewackes. This texture is included under greenschist and prehnite-pumpellyite facies, and is often regarded as a transitional feature between both the categories.

This type can be simply defined as an aggregate of coarse-grained minerals, which have undergone recrystallization due to changes in temperature and pressure. This texture is primarily seen in granulite and eclogite facies of metamorphism and is mostly present in non-foliated metamorphic rocks.

This type of texture is formed due to very high grade of metamorphism, and is seen mostly in metaigneous rocks. These rocks have undergone partial melting due to very high temperatures, and the mineral layers are present in the form of bands or swirls of tight folds. Ptygmatic folds and Schlieren textures are common, and the protolith material in most cases is a gneiss rock.

A characteristic feature of contact metamorphism, hornfelsic texture appears as a mosaic or aggregate of equidimensional mineral grains, which are situated very close to each other. This texture is formed when the protolith rock experiences very high temperature ranges with minimum pressure increase.

For example: Albite-epidote hornfels, hornblende hornfels, pyroxene hornfels, etc. The rocks that are formed due to metasomatic activity such as Skarns also show these textures.

The lower limits of metamorphism regarding temperature are considered to be about 200°C, whereas the upper limit is around a 1000°C. In case of pressure, an increase above 4 to 12 kilobars without significant increase in temperature above 200°C does not take place on Earth. These are ultra-high pressure environment and rocks formed under such conditions might exist on other planets. Metamorphic rocks are very useful for construction, architectural development, sculptures, engineering geology, etc. 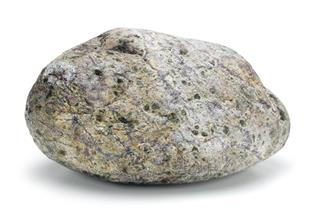 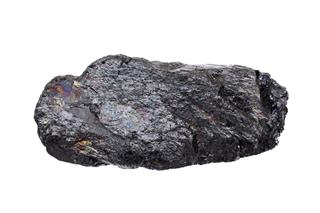 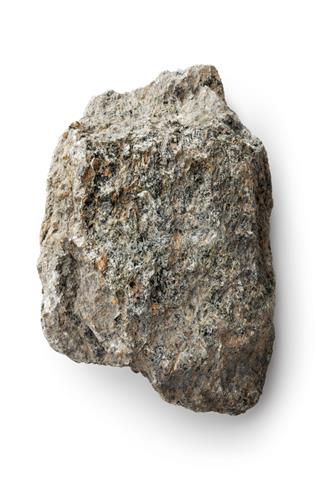 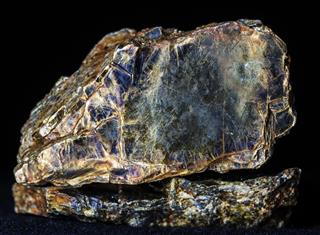