Meitnerium is one of the radioactive elements in the Mendeleev's periodic table. Here's more on it... 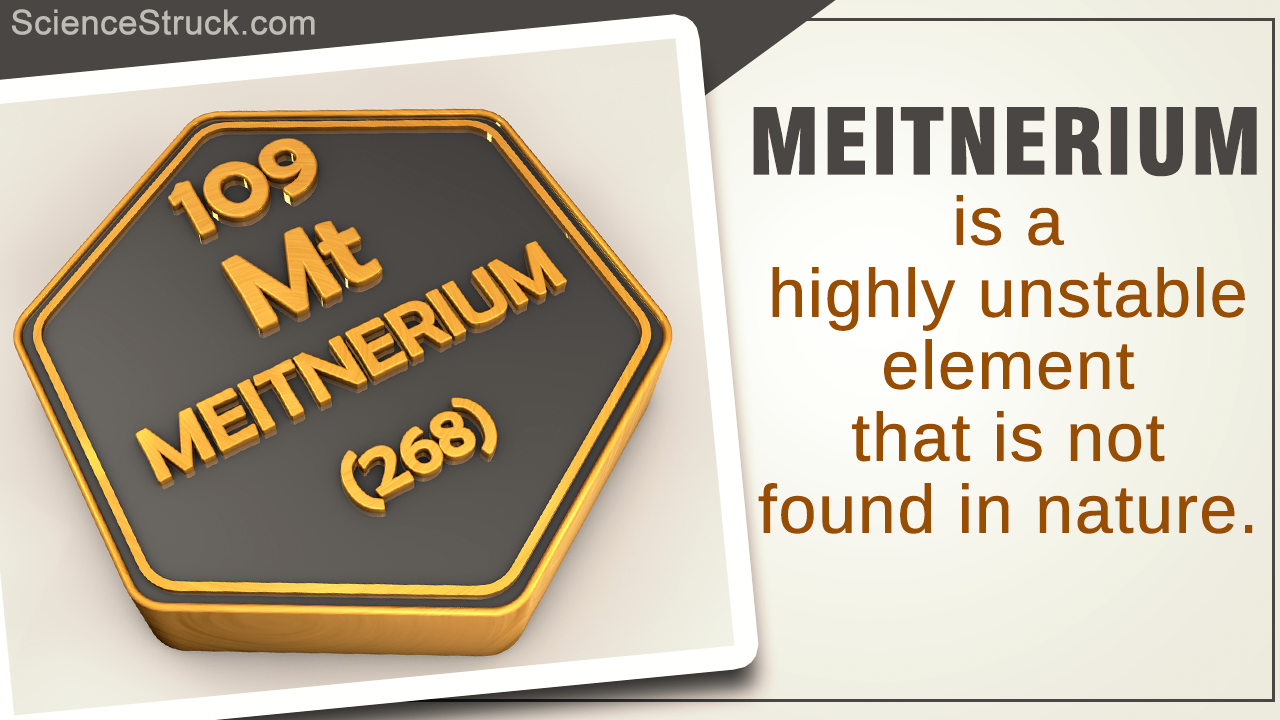 Meitnerium is one of the radioactive elements in the Mendeleev’s periodic table. Here’s more on it…

Meitnerium does not exist in a natural state, and is produced by man-made arrangements. It is also known to be a short-lived radioactive substance, and it was named after Lise Meitner, an Austrian physicist and mathematician. She was a part of a team that succeeded in making the discovery of nuclear fission. Meitner is seen as a prominent example of all those women and their achievements in the field of science, who were overlooked by the scientific community. In order to honor her, the element 109 was named after her. Apart from this honorary title, she was also chosen for the Max Planck Medal of the German Physics Society in 1949.

Coming back to the element, it is also known as unnilennium (Une).

You can infer from this table that the most important properties of meitnerium have not been determined. This is because, it is short-lived. It is known that this chemical element cannot survive more than a few milliseconds in the laboratory, thus, creating a wide gap between the research and its hidden chemical properties.

In the groups 3-12 of the periodic table, elements are classified as ‘transition metals’. These metals are known to possess the properties of ductility, malleability, and ability to conduct heat and electricity. Meitnerium is also considered to be a part of the family, and the most important fact about this element is that it is ascribed as among the heaviest of chemical elements. As this highly unstable element is not found in nature, scientists have to produce it artificially in the lab. They do this by bombarding other elements in a device known as a linear accelerator.

Peter Armbruster and Gottfried Münzenberg were the ones who were responsible for the official discovery of this element. The first synchronization took place in August 29, 1982. The experiment consisted of the bombardment of bismuth (Bi) with iron (Fe).

The chemical reaction which resulted is as follows:

Scientists have not been able to proceed with their findings which could help them discover any uses of meitnerium. This is due to the limited scope of producing a large number of atoms of this element at a time.

As you can see, its atomic number is 109, which is higher than that of uranium (92). This brings it under the classification of the ‘tansuranic elements’. These elements also have a reputation of living an extremely short life, thus, requiring impeccably precise scientific instruments to be studied upon.

Given the extremely short life of meitnerium, scientists have not been able to present much facts about the element. However, the fact that they did manage to discover some important chemical properties of this metal, despite its short existence, is highly commendable.