A very well-known group in the periodic table is that of inner transition metals. Let's find out the names and properties of these metals through this ScienceStruck article. 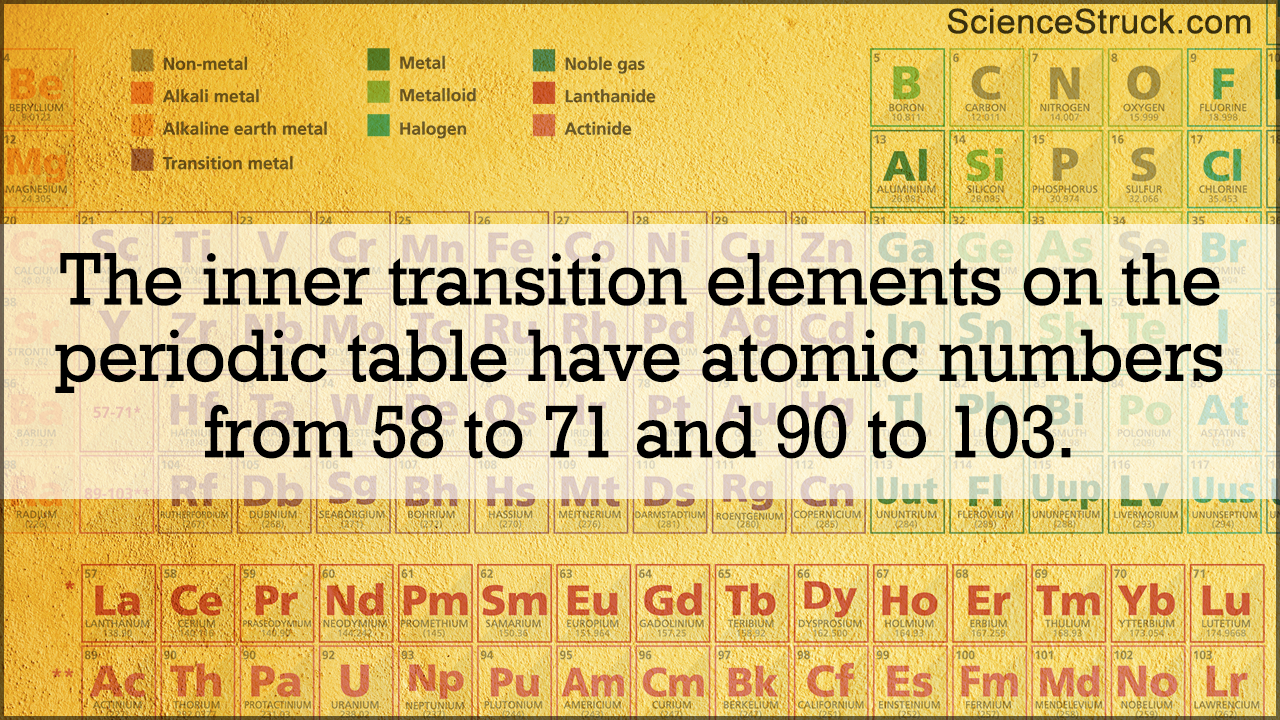 A very well-known group in the periodic table is that of inner transition metals. Let’s find out the names and properties of these metals through this ScienceStruck article.

In some instances the other name given to these elements is f-block elements.

In the modern periodic table, which is based on the atomic number and electronic configuration of the elements, there are rows and columns which are prepared to organize these elements found in nature. It was designed by the Russian chemist, Dmitri Ivanovich Mendeleev, and the German physicist, Julius Lothar von Meyer in different formats, almost at the same time, but with a few variations.

According to the new table, the rows are known as the “periods”, and the columns are known as the “groups.” It is based on these periods and groups that the 103 elements in nature are classified. In this article, we are going to read about two periods in the periodic table which occupy 30 chemical elements and are called the inner transition metals. These are subcategorized by two individual series called the Lanthanoids and Actinoids and they occupy the last two individual periods of the table i.e. the ‘f’ block. Find some basic facts about these metals from the paragraphs below.

According to the definition, they are referred to as “those elements which occupy the ‘f’ block and are commonly known as the Lanthanoids and Actinoids.” They belong to the 6 and 7 periods of the periodic table but are usually shown separately under the other elements. The Lanthanoid series, includes about 14 elements from the atomic number 58 to 71, following Lanthanum which has atomic number, 57.

Similarly, in the Actinoide series, there are 14 elements having the atomic numbers 90 to 103, and they too follow the actinium, that has the number 89. These metals in Chemistry are put together, because they have very similar properties and thus they are used for similar purposes as well.

Earlier these metals were known as the Lanthanides and the actinides, but later the International Union of Pure and Applied Chemistry (IUPAC), decided to change them to Lanthanoids and Actinoids, as the suffix “-ide” refers to anions in chemistry. There are two tables mentioned below, where you will find the names, atomic numbers and the symbols for these two periods which are popularly known in the periodic table.

* The elements Lanthanum and Actinium have been included in the table, although both these metals are not f-block elements, because they display properties similar to that of the f-block elements.

Properties of the Metals

The Lanthanoids and the Actenoids are used for a various purposes, as they are extremely strong and durable elements. The Lanthanoid elements are extremely similar to each other and used in making lasers, sunglasses, magnets for commercial purposes, etc. The elements which follow Actinium are also very similar in chemical and physical properties. Uranium and plutonium uses are in nuclear weapons and most of the other elements in this period are produced through nuclear reactions.

Lanthanoids: There are 14 elements which follow Lanthanum (La, 57) and start from Ce (58) to Lu (71). According to Lanthanum facts, all the elements in this series include +3 ions, which is why they are similar to each other in physical and chemical properties. They all react with water to release hydrogen and most of them are used to make lasers. They also have magnetic properties, which is why they are combined with other metals to make strong magnets.

Actinoids: In this series of elements, due to the closeness of the energy levels, they are very unstable and have different oxidation states like +3, +4, +5, +6. Because of these varying states, most of the elements acquire radioactive powers and thus can be used in nuclear reactors, in dating techniques, which help in determining the age of fossils. The elements like uranium, thorium, americium and plutonium are included in the list of radioactive elements and used in these nuclear reactors.