Illuminating Facts About Mammatus Clouds That You Never Knew

Many tend to believe that mammatus clouds or the beautiful pouch-like patterns occurring in the sky give rise to tornadoes. However, this is not true. ScienceStruck provides some information and facts about this distinct cloud formation.

Many tend to believe that mammatus clouds or the beautiful pouch-like patterns occurring in the sky give rise to tornadoes. However, this is not true. ScienceStruck provides some information and facts about this distinct cloud formation. 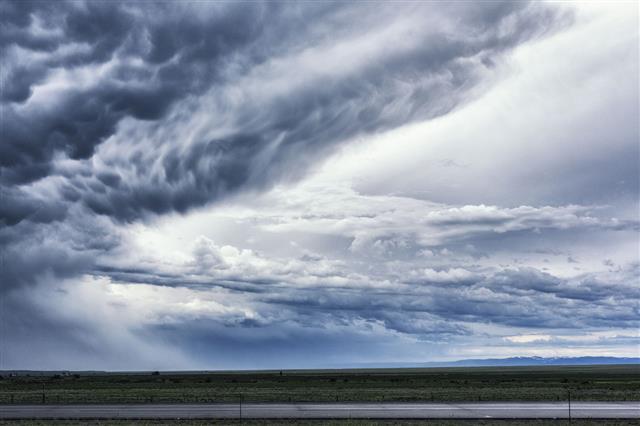 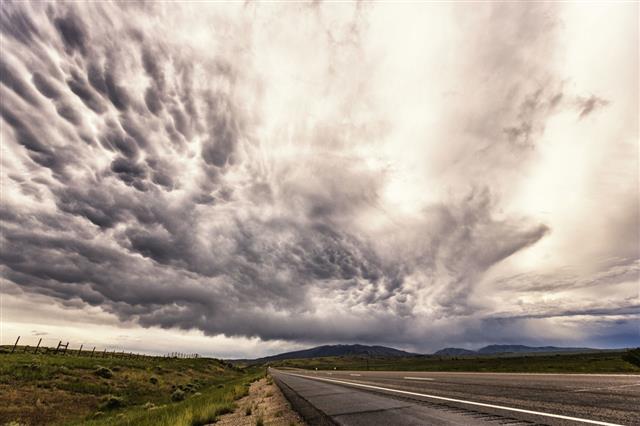 In the United States, cumulonimbus mammatus (mammatus clouds that occur with cumulonimbus) is more common and oftentimes suggestive of a strong storm or a tornadic storm. Such conditions can be very dangerous to airmen, due to which they are warned against flying.

Mammatus clouds are characterized by pouch-like patterns that hang from the bottom part of clouds, generally thunderstorm anvil clouds. However, they may also hang from other cloud types such as autocumulus, cirrcus clouds, altostratus, etc. In simpler words, they seem like structures that curve outwards underside a parent cloud. These clouds are uncommon, but in the presence of conditions that are necessary for them to occur, they can form in many places around the world.

When a strong upward current carries air containing precipitation towards the cloud top, the air is caused to spread in a horizontal manner (due to the loss of momentum), further attaching to the anvil cloud. Due to the presence of precipitation particles in high concentration, this moist air is denser than the surrounding air, and thus, tends to sink or descend.

This descending movement causes a rise in temperature of the air, in turn causing the evaporation of the precipitation particles within it. Furthermore, if the evaporation requires more energy (than what is produced), it will cause the descending air to be cooler than the air surrounding it. Thus, the descending motion will continue, leading to the formation of pouch-like patterns in the sky.

▶ These clouds have got their name from a Latin word mamma, which means ‘udder’ or ‘breast’, mainly due to their appearance.

▶ Also known as mammatocumulus (which means mammary cloud), these clouds may stretch up to a hundred miles in any direction.

▶ Generally, these clouds are made up of ice. However, they may comprise a combination of water and ice or sometimes totally water.

▶ Their pouch-like pattern is most visible or the clearest when the Sun is low in the sky (or at sunset) as the pouches are made prominent with its light.

▶ A single pouch is said to last for an average of about 10 minutes; however, a whole clump may stay from about 15 minutes up to an hour. Moreover, these may be opaque or translucent, and each pouch-like structure can either be equal or unequal in size when compared to the others.

▶ Many, often, associate these clouds with tornadoes, and tend to believe that they subside to form tornadoes. However, this is just a myth; they do not give any such surety for the occurrence of tornadoes. Moreover, their formation is a result of the sinking air or descending air unlike most other clouds that are formed due to ascending air. However, there are chances that mammatus clouds may be a consequence of tornadoes.

▶ These clouds, at times, may look quite threatening in appearance; however, it is not necessary that they are dangerous and may always give rise to severe weather conditions. Moreover, it is said that they are observed most often after the worst of a thunderstorm is over. At such times, they may appear around, before, or after such severe weather conditions (mostly thunderstorms).

▶ Turbulence and wind shear atmospheric conditions are usually required for the development of such clouds.

▶ Some believe that the sinking air that leads to the formation of these clouds generally suggests weakening of storm that is associated with the same.

▶ It is believed that when these clouds contain enough ice crystals, they may give rise to hailstorms.