Originating in Tibet, the Indus River flows through Pakistan, Jammu and Kashmir, and western Tibet, to finally meet the Arabian Sea. ScienceStruck gives you some interesting facts about this river.

Originating in Tibet, the Indus River flows through Pakistan, Jammu and Kashmir, and western Tibet, to finally meet the Arabian Sea. ScienceStruck gives you some interesting facts about this river. 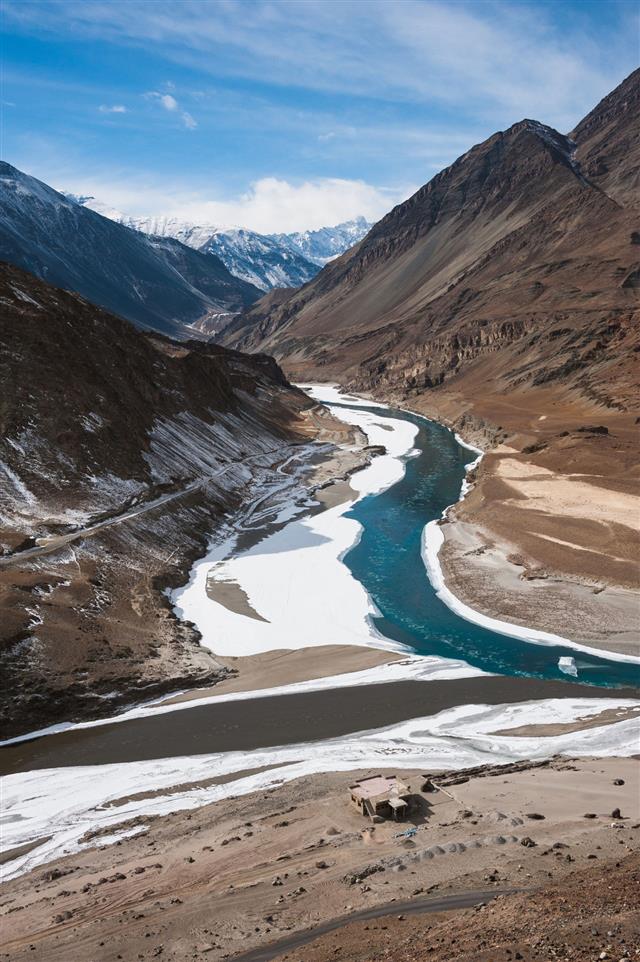 The Indus River is the only river that is home to Platanista indicus minor, also known as the Indus River Dolphin (or blind dolphin). It is a type of river dolphin, which is one of the most threatened cetaceans on the planet.

The Indus River is among the longest rivers in Asia. Originating in Tibet, it flows into the Arabian Sea, stretching over 1,988 miles in length. It rises in the Kailash Range of the Tibetan Himalayas and flows west across India, then southwest through Pakistan, and finally flows into the Arabian sea (southeast of Karachi). It is Pakistan’s longest river, and has a total drainage area of over 450,000 square miles. This river is of prime importance to Pakistan. It is also considered as one of the most important rivers on the Indian subcontinent.

◼ The word ‘Indus’ comes from an ancient Greek word Indós. This Greek word was taken from the old Persian word Hindus that was derived from a Sanskrit word Sindhu. Furthermore, it is believed that the country India and state Sindh in Pakistan, have got their names from this river.

◼ The river has its name in many different languages. In Urdu, it is known as Daryā-e Sindh, while it is called Sindhu Nadi in Hindi.

◼ It is the 21st largest river in the world, as a result of its estimated annual flow of about 207 km3.

◼ One of the earliest civilizations called the Indus Valley Civilization, is known to have flourished around the basins of the Indus River and its tributaries. As of today, this area is covered by Pakistan and Northwest India. Around 3,300 BC, major cities like Harappa and Mohenjo-daro and many others were formed. These cities are believed to have housed the largest human population considering the ancient times.

◼ The melting snow and glaciers of the Karakoram, Hindu Kush, and Himalayan ranges, are said to provide additional water to the river. Furthermore, the rains in the monsoon season, that is from July to September, supply the rest of the flow.

◼ Out of the many mythical rivers depicted in the Rigveda, ‘Sindhu’ is one. It is believed to be a reference to the Indus River.

◼ Indus plays a major role in serving water for agriculture and food production in Pakistan. It is a principal source mainly for the states of Punjab and Sindh. In the word ‘Punjab’, ‘Punj’ means five and ‘aab’ means water. When combined, the word means ‘five waters’. Thus, Punjab is known as the ‘land of five rivers’. Finally flowing into the Indus, the five rivers in Punjab are Jhelum, Chenab, Ravi, Beas, and Sutlej. They constitute the Indus River system.

◼ Indus is an important river in Pakistan, supporting many heavy industries. It also serves as the main source of drinking water for the people of this region.

◼ It is believed to display a tidal bore, which is a phenomenon observed only in a few rivers. A tidal bore is a high wave that can be dangerous and is caused by tidal flow.

◼ It is believed that the flow of this river varies with the changing seasons. While the river is slow during winters, there is a rise in its flow during spring and early summer. During the monsoon months, it tends to overflow its banks and is prone to flooding.

◼ Due to the turbulence of its rushing waters, it is navigable only in certain parts of its course. That is, it is suited for navigation only in low-water period.

◼ The Indus River and its basin is said to have a high level of biodiversity, providing shelter to about 25 amphibians and 147 other species as well as supporting an ecosystem of temperate forests, plains, and arid countryside.

◼ The level of pollution in the river has increased over the years. This was mainly because of the factories set up on its banks that released harmful pollutants into the river. Due to this, such factories were ordered to be shut down.

◼ Indus spreads out into a delta which forms in its final stage (where it flows into the Arabian Sea), known as the Indus River Delta that consists of a diverse and unique ecosystem. The largest arid mangrove forests in the world can be found in this region. It is also home to many birds and fish.

Extensive irrigation and agricultural practices use up great amounts of the river’s water before it reaches the delta. This has led to disastrous conditions for the local population and the environment. However, it is said that the floods that occurred in Pakistan (in 2010) proved beneficial to the river delta as they brought along fresh water.