Most people may have never heard about the element named antimony. This ScienceStruck article provides you with a detailed account of all the facts associated with this element, which will provide you with the required knowledge.

Most people may have never heard about the element named antimony. This ScienceStruck article provides you with a detailed account of all the facts associated with this element, which will provide you with the required knowledge.

Antimony is a chemical element belonging to group 15 of the periodic table. The name is derived from two Greek words: anti―which means not and monos―which means alone. The stable non-radioactive isotope of this element looks like an unprocessed silver-white metallic rock. This particular element is a constituent used in manufacturing gun bullets. Without much ado, let us take a look at the facts and uses that are segregated under various categories.

Antimony is the 5th row p-block element of the periodic table.

Antimony ores were first encountered in the 4th century BCE. The ore antimony trisulfide (Sb2S3) was used in the form of a paste as a cosmetic, in ancient Egypt and the Middle East. An antimony-laden artifact dated 3000 BCE was discovered in Tello, Chaldea (presently in Iraq). An antimony-plated copper object dating somewhere between 2500 BCE and 2200 BCE has been unearthed in Egypt.

The first mention of a process of isolating the pure form of this element from its ore can be found in the book De la pirotechnia by Vannoccio Biringuccio, written in the Italian language in the year 1540. This book was released much before the highly acclaimed Latin book, De re metallica, written by Agricola in 1556. In spite of this, Agricola is often accredited with the discovery of this element, which is absolutely incorrect.

The first record of pure or ‘native’ antimony’s natural occurrence, in the Earth’s crust, was the mention made by the Swedish local mine district engineer and scientist Anton von Swab in 1783. This unadulterated sample was gathered from the Sala silver mine in a mining district of Sala, Västmanland in Sweden.

Antimony, which adds hardness and smoothness, is mainly used in lead alloys, like for use in batteries to provide better finishing. Increase in the proportion of this element in the lead alloy imparts hardness along with making it more brittle. Like water, the alloys of this element have this peculiar property of expanding when approaching freezing temperatures, along with retaining finer details of a mold. This is one of the reasons why these alloys are used in making typefaces for sharp and clear printing.

These days, antimony is being increasingly used by semiconductor manufacturers in the production of diodes, IR detectors, and Hall-effect devices. It is a major constituent of small arms and ammunition. Medicines like anti-protozoan drugs have this element in traces. Oxides and sulfides of antimony and compounds like sodium antimonate and antimony trichloride are used to make ceramic enamels, glass, flame-proofing compounds, paints, and pottery.

Antimony is rarely found in its purest noble form. It is more frequently found in the form of sulfide (Sb2S3), which is its predominant mineral ore. China produces almost 84% of the world’s antimony, wherein the Xikuangshan mine of Hunan Province has the largest ore deposits with an estimated 2.1 million metric tons. South Africa, Bolivia, Tajikistan, and Russia are other places where this element is encountered. The west of Atlantic, Brazil, and Central America has one mine each, but have a very negligible contribution to the world’s reserve of this element.

Antimony itself and many of its compounds are highly toxic. Although not as prevalent, the poisoning of this element causes similar effects like arsenic poisoning. It can cause headache, body pain, and dizziness, and if its concentration rises, poisoning could result in a type of violent and frequent vomiting, and may even lead to death. 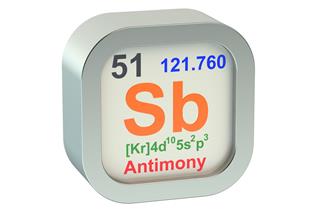 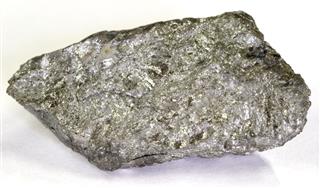