What Does the Law of Superposition Mean?

Home / Uncategorized / What Does the Law of Superposition Mean?

The law of superposition was formulated back in the 17th century by Danish scientist Nicolas Steno. He attributed the formation of most older layers of rock to the great flood mentioned in the Bible, and used the law of superposition to establish an interconnection between the rocks that he believed to have been formed before the flood and the ones that he thought had formed after it. This was the first use of superposition for differentiating the time periods in the Earth’s History.

Believe it or not, you have a time portal right there in your very own backyard, which can take you way back through the ages, even all the way back to the Jurassic Era! Can you see it? No? Now, don’t go blaming your eyes if you don’t see it. Trust me, your eyesight is just fine. The real reason why you aren’t seeing it is because you are looking in the wrong direction. The time portal is located right there under your own two feet.

The very ground that you tread upon each day is a time portal. Hidden beneath it are the mysteries of several past centuries, which can only be unraveled by the true explorers – the geologists. They are the present-day time travelers, who are able to peer through the veil of time back into the past. Today we shall learn about one of the most important geological tools around – the ‘Law of Superposition’.

Definition of the Law of Superposition

In an undisturbed collection of sediment or rock; the layer on the top is the youngest layer, while that at the bottom is the oldest. For instance, if in a given sample, a layer of limestone is present on top of a layer of shale stone, then the limestone layer is the younger of the two.

From this definition, it is clear that the law of superposition is concerned with the different layers of the Earth, and their respective ages. It helps in the determination of the age of a particular layer of earth, relative to the ages of the layers that are above and below it.

The law of superposition is one of the most fundamental principles of stratigraphy – the branch of archeology which studies the geological layers of the Earth and soil. This law has a proven record of being able to accurately determine the relative ages of the different layers of soil.

The formation of the different layers of soil is a result of the erosion of rocks over millions of years. Natural erosive agents such as wind, flowing water, etc., erode rocks, breaking off small particles from their surfaces. These particles, along with the minerals in them, get broken down into fine soil, which is then deposited on distant plains and other large land masses.

As this process continues, many years later, several layers of soil are formed one over the other on the site of deposition, just like the cards in a deck. The card at the bottom of the deck is always placed first while, and as the stack gets built, the one on the top is placed last. Similarly, the topmost layer of soil is the most recent one, while the bottommost is the oldest among the different layers of soil. This forms the basis of the working on the law of superposition.

The law of superposition provides us with a window into time, through which we can not only watch the events of the ages past, but also establish a chronologically correct sequence of their occurrences.

For example, if a layer of soil showing evidences of a flood is found to be deposited above another one that provides evidences of a famine, we can establish with certainty that a period of famine was followed by the occurrence of a flood.

Thus, the law of superposition helps in relative dating of various layers of soil, which can be used to establish a chronology of the occurrence of events at the different points of time, distinguished by the different deposition times of each layer.

The law also plays an important role in the field of archeology. It is considered the best method used by archaeologists for determining the relatives ages of various archaeological materials and artifacts that are dug out from the earth.

Though the law of superposition is an accurate way of determining the ages of the layers of earth relative to one another, it has a few inherent flaws. The definition of the law itself indicates that it is valid only for the dating of an ‘undisturbed’ sample of soil or rock. Thus, application of the law to earthen layers disturbed by natural occurrences, such as landslides, upheavals, cave-ins, or the creation of thrust faults which can cause old strata to overlay the younger one, can give misleading results.

Large-scale excavations by humans in the past can also disturb the layers of soil and rock to such an extent, that it can confound the outcome of the law’s application. Similarly, various environmental reasons could have caused a period of time to pass without any sedimentary deposition. This could adversely affect the accurate establishment of a historical timeline.

Now it’s time to put our understanding of this law to the test. The following is a small worksheet with two example problems, the solutions to both of which can be derived through the application of the law of superposition, similar to what is taught at the University of Wisconsin to understand the concept better.

Sherlock Holmes was called to a scene of crime, where the wife of the owner of the house was murdered. It had rained during the night, so the ground was full of footprints and tire tracks. By observing these, and by interrogating the tenants of the house, Sherlock Homes was able to catch the culprit. The following is an illustration of the prints on the ground at the crime scene, followed by the result of the interrogation. 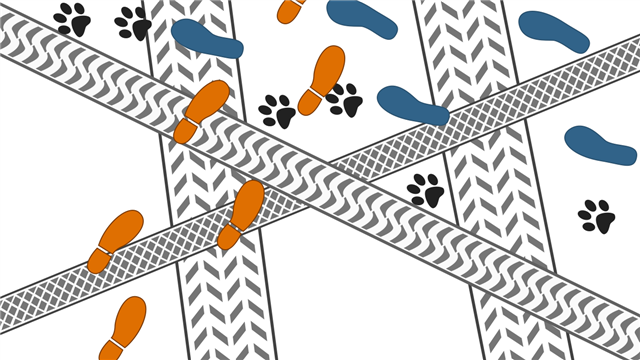 1) The owner of the house drives a car.
2) The maid rides a bicycle to work.
3) The cook rides a motorcycle.
4) The butler walks to work.
5) The neighbor has a dog, and visits often.

From this information, can you determine who the culprit was?

Number the events shown in the illustration below, in the order of their occurrence 1 – 9.

Thus, the law of superposition proves to be a useful tool for establishing the interrelation between different layers of soil in terms of their respective ages. It forms an integral part of modern-day geology and other natural sciences.