What are Weak Bases?

Bases are chemical substances that either donate an electron pair or accept a hydrogen ion in a chemical reaction. Weak bases are not able to do so completely. The concept of weak bases has been further discussed in this article.

Home / Uncategorized / What are Weak Bases? 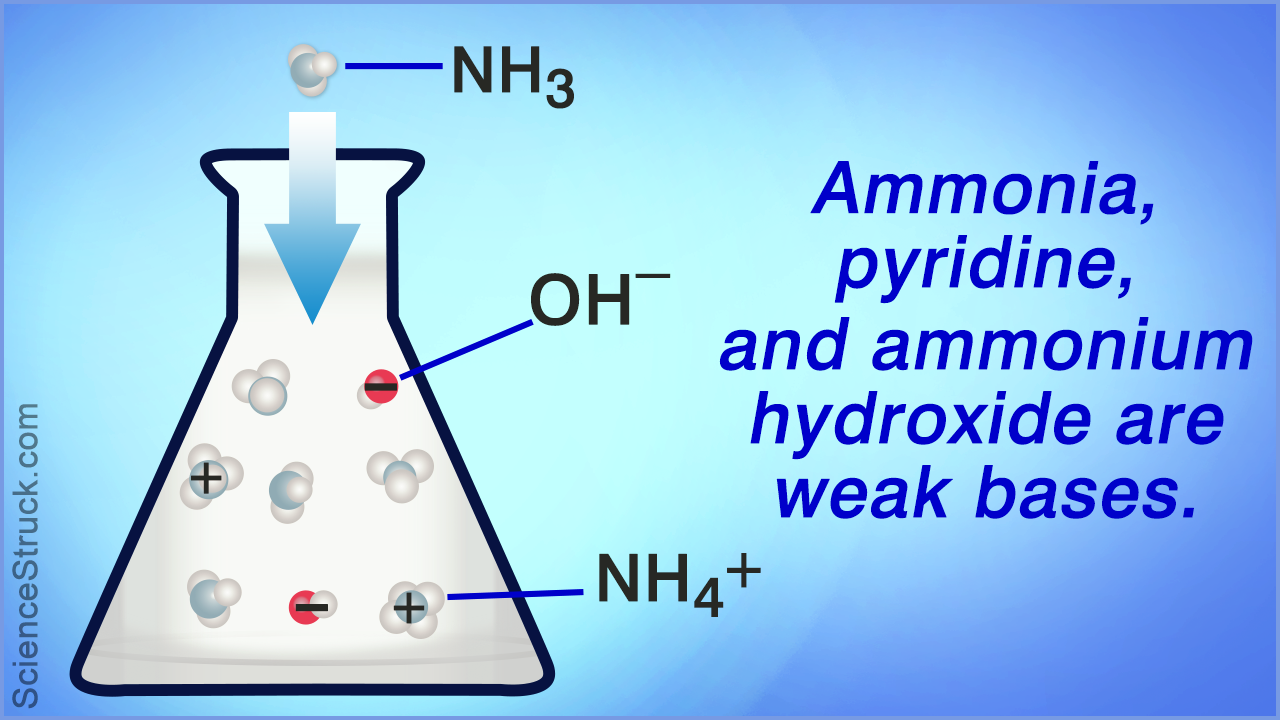 Bases are chemical substances that either donate an electron pair or accept a hydrogen ion in a chemical reaction. Weak bases are not able to do so completely. The concept of weak bases has been further discussed in this article.

In the world of chemistry, acids and bases are two important classes of compounds. Before we move on to know more about weak bases, we must understand that there are numerous theories in chemistry which define acids and bases.

While the Bronsted-Lowry definition describes a base as a substance that accepts a hydrogen ion, or rather protons, the Arrhenius theory of bases defines them as substances that release a hydroxide ion in the aqueous solution. It has to be understood that definitions of all these theories (including the Lewis theory of acids and bases) may have some limitations, and depending on their applicability, scientists use them to explain the properties exhibited by acids and bases.

When we use the Bronsted-Lowry concept of bases, we define weak bases as the chemical substances in which addition of protons or hydrogen ions remains incomplete. This makes the pH value of weak bases very low as compared to that of strong bases. It must be known that strong bases have a high pH value, close to 14 on the pH scale, while acids have pH values less than 7. The pH value of 7 stands for the neutral nature of a chemical compound.

The pH level of an acidic substance is given by pH = -log10[H+]. However, since we’re dealing with weak bases, it is necessary to know the pOH, which is as follows:

While we can understand weak bases by knowing their exact definition, it is better to know what are strong bases, in order to make our understanding about bases crystal clear.

Similarly, weak base is a chemical substance, like ammonia, doesn’t produce hydroxide ions by itself, but reacts with water to do so. Simply stated, in weak bases, hydroxide ions are not completely ionized in the solution.

How to Determine the Strength of Weak Bases?

It is easier to measure the pH level of acids and bases using the pH level formula, only when hydrogen and hydroxide ion concentrations are known. However, there is a better way to determine strength of bases. It is based on the behavior of bases in water. In chemical equilibrium, the measure of the strength of bases is given by the base ionization constant or the base dissociation constant (Kb). The same factor for weak acids is known as acid ionization constant (Ka).

Base Ionization Constant (Kb): It is the equilibrium constant of a chemical reaction involving the dissociation of hydroxide ions.

The base ionization constant (Kb) is equal to the product of concentrations of the chemical reaction products, divided by the equilibrium concentration of the original base.

Due to the numerous orders of magnitude of Kb, the logarithmic value is preferred for calculations. The relationship between Kb and pKb is similar to the pH formula relation. That is:

Another formula that can come handy in finding the strength of weak bases is the product of Kb, Ka, and Kw (ionic product of water). The relation between the three is given by: