A beautiful streak of colors paints the sky after a fresh shower of rain. It's the rainbow, and its sure gets us mesmerized. Did you know that there are different types of rainbows? Well, we have some interesting facts about them in the article below. Read on... 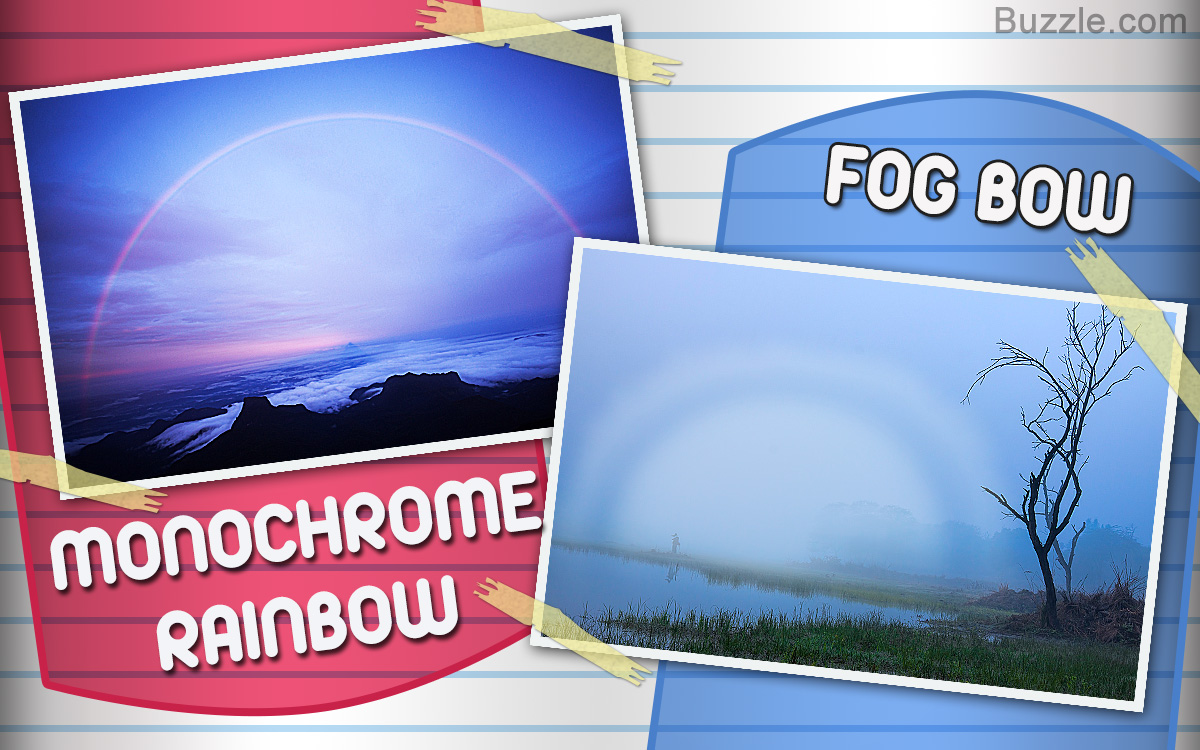 A beautiful streak of colors paints the sky after a fresh shower of rain. It’s the rainbow, and its sure gets us mesmerized. Did you know that there are different types of rainbows? Well, we have some interesting facts about them in the article below. Read on…

Nature’s abundant beauty has conquered the different seasons of the year. Talking about fresh showers in the rainy season, the greenery and the fresh spring of air make a perfect atmosphere. There is a spectacular arc of colors that adds to the beauty. With seven vibrant colors forming a misty line touching the horizon, a rainbow truly rules all the visual and charming events of nature. We all know about a rainbow, at least we all know all about the colors in it. How many times have you wondered about what is it that makes a rainbow, and that it could have different types? Let us enjoy the rainbow, and this time, not only by looking at it, but observing and learning about the facts, like the formation and the different rainbow types.

Let us begin with a quick view of how a rainbow is formed. Now, after a rain shower, there are still many tiny droplets of water in the sky. When sunlight passes through these tiny droplets, it gets refracted or bends in a particular angle. The sunlight or white light is actually made up of a spectrum of colors and has different wavelengths. Each wavelength is associated with a specific color. Each tiny drop of water acts like a prism, where the light gets refracted (bends in a particular angle) and reflects in the droplet of water. After this reflection it gets refracted again and is dispersed in its different wavelengths, that is different colors. This reflection is strong and makes a defined curve of colors that is the rainbow. The rainbow is an excellent work of many tiny water droplets and the sunlight. A rainbow is not really an arc of colors but is a full circle of colors. We get to see only an arc of the rainbow. The distance of the sun from the earth mainly determines the length of the arc. The closer the sun, more part of the circle will be included in the arc. Now let us know on what are the different types of rainbows.

The charismatic stream of colors is classified in 5 different types. Each has a distinct nature.

A primary rainbow is the most commonly seen rainbow. In fact, it is the two streaks of red and purple that appear right after a rain shower. More on the primary rainbow tells us that, it forms between 40 to 42 degrees of the anti solar point (an imaginary point opposite to the sun), with a single reflection taking place in the water droplets. If there are smaller droplets only violet may be visible, as the other – reds and greens, tend to disappear due to the mist.

A supernumerary rainbow is formed on the inside of the primary rainbow. These will be faint or pastel streaks of color, that will sometimes also form outside the secondary rainbow, but very rarely. A supernumerary rainbow is formed due to the interference of the light rays with each other, that are of different wavelengths, which have a different path of travel after reflection. These rainbows will be visible when the water droplets are extremely small.

A lunar rainbow is also known with many names like white rainbow or moon bow. This rainbow is not formed due to sunlight, but is a result of the near full moon light. Here the light from the surface of the moon reflects in tiny droplets that causes the refraction and a stream of colors eventually. However, a moon bow will be very faint, so much so, that the naked eye will not be able to capture it. Without a special device the eyes will only see white arcs in the sky.

As the name suggests a fogbow is caused due to fog, and not tiny water droplets. This happens when the water drops are extremely tiny, that light cannot pass through them in the same manner as it would in a normal rainbow. The reflection takes place, but does not disperse light adequately in its colors. Instead the colors overlap that gives a white colored band, which is also known as white rainbow. Fogbows will typically appear in cold areas.

Some Other Types of Rainbows

This type of rainbow is caused by the reflection of the reflected light, that is the sunlight. Here the light travels from two directions, one from the sun and the other from the reflected image of the sun. This is most likely to happen when a rainbow is formed on a water body. Both the angles of light will be different, hence you will see two rainbows.

In this type of a rainbow, the same pattern takes place however, if it is sunrise or sunset, the rays of light will travel a long distance until they reach the water droplets, so the shorter wavelengths which make blue and green, get scattered easily before actually reaching the water droplets, and all that is visible are the shades in red.

We must have come across webs of spiders covered in dew and mist. Sometimes these tiny drops of water scatter the sunlight passing through them and give visions of small rainbows, which are known as spiderbows.

Some other fun facts are that rainbows are also formed in mist that is produced above waterfalls and also when surfing. You will also find faint rainbow when sprinkling the garden and sometimes even when spraying plants.

All these facts complete different types of rainbows. We knew of rainbow as one of the most pleasing and colorful stream in the sky, but now we know, it is a creation of many colorful bows of sheer beauty!