A Simple Guide to the Steps of the Water Cycle

There are a number of steps involved in the water cycle. Water passes through all three states of matter during this cycle. Natural forces such as the sun, air, land, trees, river, seas, and mountains play an important part in completing the water cycle.

There are a number of steps involved in the water cycle. Water passes through all three states of matter during this cycle. Natural forces such as the sun, air, land, trees, river, seas, and mountains play an important part in completing the water cycle.

Correctly stated by the famous painter and sculptor, water is one of the most important substances on earth, as all living organisms require water to survive. Moreover, it is a well-known fact that water covers around 70% of the surface of the earth. The water cycle, also known as the hydrologic cycle, can be defined as ‘A continuous, endless and natural cycle of evaporation of water, subsequent condensation, and precipitation as rain and snow.’

The following article explains a little more about the water cycle, in which water circulates from the land to the air in a continuous cycle.

The sun happens to be the driving force of the water cycle. It heats up the water in seas, rivers, lakes and glaciers, which evaporates and rises up in the atmosphere. Water is also evaporated through plants and soil through a process called transpiration. This evaporated water is in the form of water vapor, which cannot be seen with naked eyes.

This water vapor then comes in contact with air currents, which take it higher into the atmosphere. After reaching cooler temperatures, the water vapor condenses to form clouds, which contain millions of tiny droplets of water.

These clouds move all round the globe and grow in size, collecting more water vapor on their way. When it becomes too heavy for the clouds to hold anymore water vapor, they burst and the droplets of water fall back on earth in the form of rain. If the atmosphere is cold enough, the form of precipitation changes from rain to snow and sleet.

In the last step, rain or melted snow flows back into water bodies like rivers, lakes, and streams. Rainwater is also soaked up by the soil, through a process called infiltration. Some of the water also runs off the surface or seeps in the ground, which may later be seen as groundwater or freshwater springs. Eventually the water reaches the oceans, which are the largest water bodies and the biggest source of water vapor.

This is a never-ending cycle, and all the water in the oceans and other water bodies is subject to this cycle, which is running continually.

The Processes Involved in the Water Cycle

The water cycle happens to be a simple cycle, yet involves a lot of processes. Some of the processes that are involved are:

Evaporation:
When the heat of the sun causes water to turn to water vapor, it is known as evaporation.

Condensation:
As the water vapor moves higher in the atmosphere, it cools down due to a decrease in the temperature. On cooling, the water vapor condenses to form tiny droplets of water. This process is known as condensation.

Precipitation:
The tiny droplets of water that are formed as a result of condensation keep on accumulating in the clouds. When a cloud can no longer accommodate any more water droplets, the water is released from them in the form of rain, hail, sleet, or snow.

Transpiration:
Plants absorb water from the soil and transport it to the leaves via the stem. When this water evaporates from the leaves and stem, it is termed as transpiration.

Infiltration:
When the water on the surface of the earth seeps down the ground, it is called percolation or infiltration. It later forms aquifers in low-lying regions.

These were the major steps and processes involved in the water cycle. A cycle – from water vapor in the air to precipitation as rain – takes about nine days to complete. 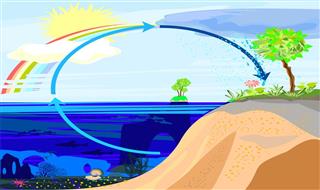 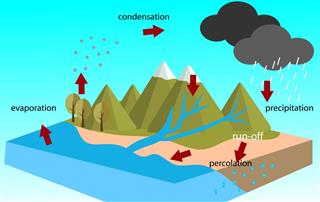