The Structure, Chemical Formula, and Uses of Phosphorus Pentoxide

Phosphorus pentoxide has a very interesting molecular structure, and it is also used for various purposes.

Phosphorus pentoxide has a very interesting molecular structure, and it is also used for various purposes.

Phosphorus pentoxide was used in the early and mid-20th century to procure phosphoric acid, by dissolving the former in water. But this required a supply of white phosphorus, which is comparatively hard to find. As a new method of forming phosphoric acid was discovered, this method fell out of fashion.

It is a white crystalline solid, and is extremely hygroscopic, i.e., it has a very strong attraction to water.

It is formed by burning elemental phosphorus in the abundant presence of oxygen. The equation of the reaction is as follows:

Phosphorus pentoxide can be found in numerous crystal structures (polymorphs), but the most commonly found and most stable configuration is the one shown in the illustration below. 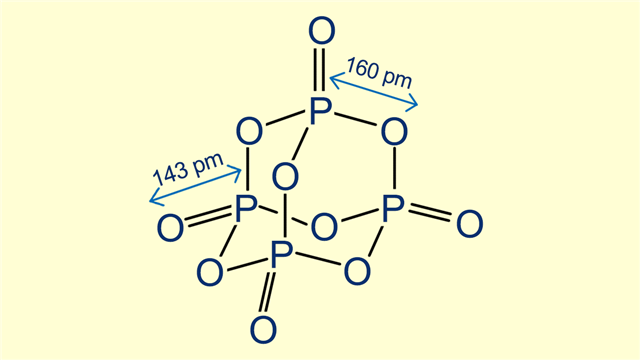 For those of you who may have difficulty grasping the 3D form, here’s a simpler 2D form. 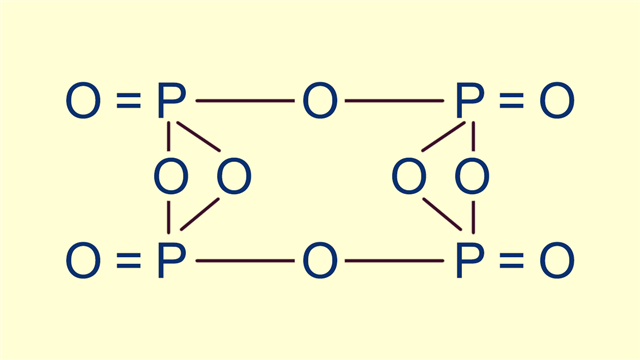 ► The density of phosphorus pentoxide is 2.3 g/cm3.

► The boiling point of phosphorus pentoxide is just 20°C more than its melting point, at 680°F. This means that if the heat source is sufficiently steady and high, it can sublimate, or skip its liquid state and convert directly to vapor.

► It is extremely hygroscopic, and its reaction with water is violently exothermic.

It produces various forms of phosphoric acid depending upon the amount of water available. This makes it risky to store and transport. However, it doesn’t catch fire like most other compounds, i.e., it doesn’t react with atmospheric oxygen even if heated.

Most practical applications and uses of phosphorus pentoxide are centered around its extreme affinity to water, which makes it an excellent dehydrating agent.

► It is used as a dehydrating agent in organic synthesis, which is the process of forming organic compounds through reactions of other organic compounds. This is most important for converting amides into nitriles: R-C(O)NH2 ➙ RCN, by taking away the two H atoms and one O atom in amides.

► It is also used to form anhydrides of oxygen-containing acids. It can convert even the strongest acids to anhydrates, such as nitric acid (HNO3) to nitrogen pentoxide (N2O5) and sulfuric acid (H2SO4) to sulfur trioxide (SO3).

By definition, it doesn’t react with non-oxygen-containing acids, such as HCl, since there is no H2O molecule to extract. In fact, phosphorus pentachloride (PCl5) reacts with water to give HCl and phosphorus oxides, including the pentoxide form.