A Basic Comparison of Laminar Flow Vs. Turbulent Flow

Osborne Reynolds suggested that the nature of the flow of a fluid depends on its density, flow rate, the dimensions of the container through which it is flowing, and its viscosity. This deduction led to the classification of the flow mechanisms into two broad categories: laminar flow and turbulent flow. We have tried to simplify them, to help you understand this aspect of fluid dynamics better. 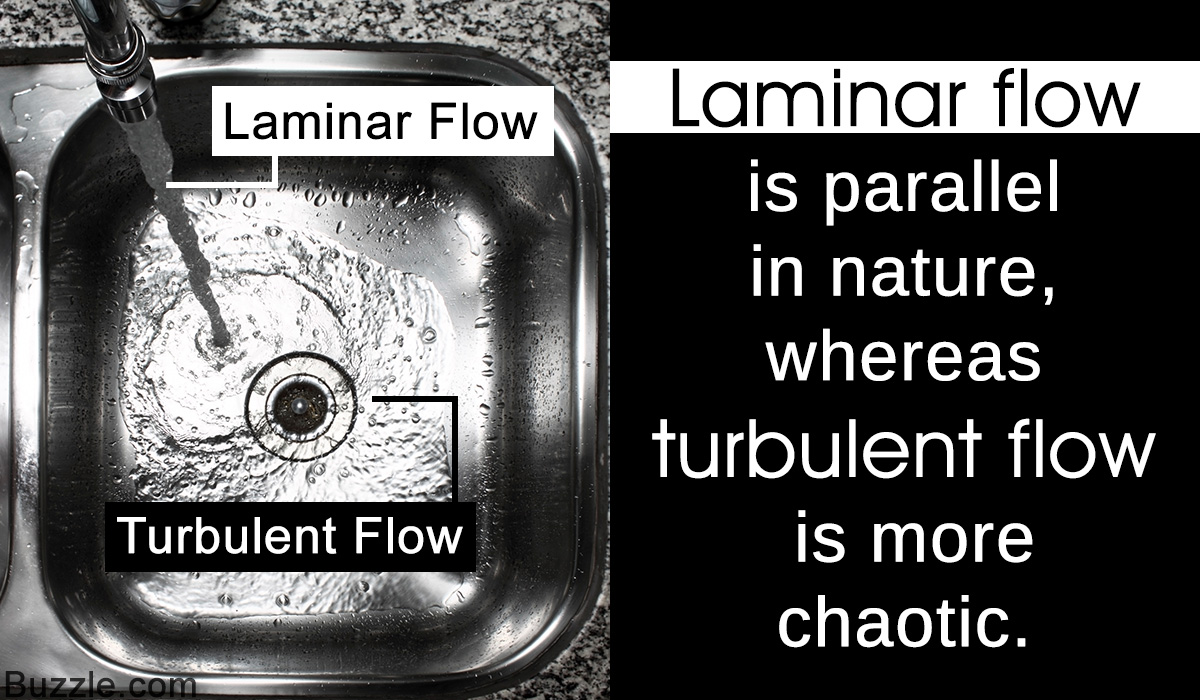 Osborne Reynolds suggested that the nature of the flow of a fluid depends on its density, flow rate, the dimensions of the container through which it is flowing, and its viscosity. This deduction led to the classification of the flow mechanisms into two broad categories: laminar flow and turbulent flow. We have tried to simplify them, to help you understand this aspect of fluid dynamics better.

In between the extreme stages of laminar and turbulent flow of a fluid, there lies an intermediary phase called transitional flow, which marks the transition of one kind of flow to the other. The characteristics of transitional flow cannot be stated definitively; however, the Reynolds number for this kind of flow lies between 2,300 and 4,000.

Interestingly, it is possible to maintain the laminar flow state even when the Reynolds number falls within this range, by carefully monitoring the relevant conditions.

In the study of fluid dynamics, the contributions of two noteworthy scientists, George Gabriel Stokes and Osborne Reynolds are truly invaluable.

► Stokes’s Theorem in vector calculus has opened the doors to solving many mysteries of science, and plays an iconic role even in fluid mechanics.
► The analysis of the Navier-Stokes equation, interestingly, defines the concept of turbulent flow, although contemporary tools of mathematics and physics do not have the capability to solve them completely.
► Stokes, in 1851, also introduced the concept leading to the formulation of the very dimensionless quantity (the Reynolds number) that the modern understanding of fluid flow is based on, and Reynolds, in 1883, demonstrated it with the seminal-colored dye injection experiment.

The dimensionless Reynolds number is the factor used to discern what kind of flow it is. It can be defined as the ratio of a fluid’s inertial forces to its viscous forces, and can be mathematically represented as above:
where,
ρ → density of the fluid
V → velocity of the fluid
D → diameter of the pipe inside which the fluid is flowing
μ → coefficient of viscosity

In general, if Re < 2300, the fluid experiences laminar flow. If Re > 4000, its flow is turbulent. If the value of Reynolds number lies in between these two boundaries, it is a case of transitional flow.

An Understanding of Laminar and Turbulent Flow

Characteristics
♦ In laminar flow of a fluid, which is synonymous to streamlined flow, the various layers of the fluid slide parallel to each other, without any disturbance, interference, or intermixing of any sort.
♦ The particles of the fluid move in an orderly manner, in straight lines that are parallel to the walls of the pipe containing it.
♦ This kind of flow is characterized by the absence of cross currents, eddies, and swirls.

♦ Laminar flow can be understood best by imagining the separate layers of the fluid as cylinders of different radii, flowing at different speeds. The innermost layer flows the fastest, whereas the outermost layer hardly flows, and can even be considered stationary.
♦ The overall velocity of the flow is quite low.
♦ The shear stress of this system depends entirely on the viscosity of the fluid (μ), and has no relation to fluid density (ρ).

• The internal flow of any liquid within a pipe or tube is laminar in nature, as the dimensions of the container will always remain constant, keeping the volume of liquid flowing through it fixed.
• A fluid does not necessarily have to be in the liquid state. Air, which is a mixture of gases, is also a fluid. Quite interestingly, airplane wings are designed to have their characteristic shape so as to facilitate the streamlined movement of the aircraft through the fluid medium of air. The flow of air over these wings is streamlined or laminar in nature.

Characteristics
♦ As the name suggests, turbulent flow is agitated, chaotic, or rough in nature, and is not associated with the orderly sliding of layers over each other.
♦ The adjacent layers of the fluid get mixed with each another, and there is a large amount of friction between the boundaries of these layers.
♦ This kind of flow is extremely irregular and unpredictable, and is characterized by the presence of eddies, tiny whirlpools, swirls, and waves.

♦ A fluid that is flowing turbulently possesses a large amount of kinetic energy. Once this kinetic energy is dissipated, the flow, once again, becomes laminar.
♦ The flow rate or velocity at which the fluid flows, is really high when the flow is turbulent.
♦ The shear stress in this case additionally depends on the density (ρ) too.

• Although the flow of almost every fluid can be considered turbulent at some point of time or the other, the perfect example would be ocean currents and waves.
• Convection of any kind results in turbulence. The surface of the sun, the flow of any liquid that is boiling, even air currents in the atmosphere all are turbulent.

Laminar flow can transform into turbulent flow, and vice versa, depending on different conditions. Flow area is one of them; when the area is increased or decreased, the fluid may show different flow properties.

A good example to illustrate this is that of blood flowing in the human body. Under normal circumstances, the blood flow in blood vessels can be considered laminar. However, if there is a constriction in an artery, if the direction in which the blood is flowing is opposite to that of the pressure exerted by the heart, or even if the path that the flowing blood has to take is around a corner or curve, the flow is no longer laminar, but instead it is turbulent.

A similar analogy can be used to understand how water flows out of a faucet. Inside the plumbing, the flow may be laminar. When the tap is opened, and water is allowed to flow out, the flow may be laminar or turbulent depending on water pressure. Once the stream of water hits the bottom of the sink, the nature of the flow of water inside the washbasin will be entirely turbulent.

We hope we have been able to sufficiently explain the difference between laminar and turbulent flow of fluids.