Working of a Fusible Plug

One of the most important safety measures to prevent any mishap in the working of mechanical appliances is what is known as the fusible plug. More on this subject follows... 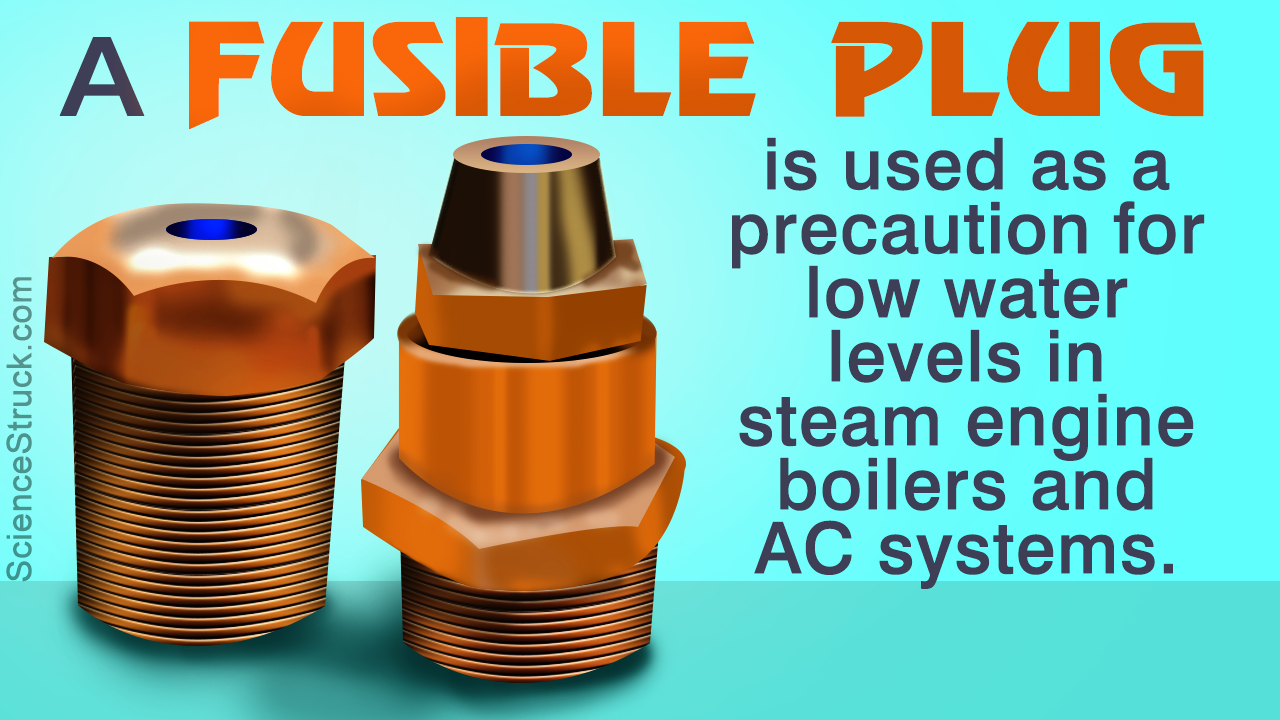 One of the most important safety measures to prevent any mishap in the working of mechanical appliances is what is known as the fusible plug. More on this subject follows…

The working of machines always comes with the risk of a mishap. So what the manufacturers do is, they include certain devices in these machines which could ensure their safety and lessen the risk of any kind of disaster. One such machine is the steam engine, whose working involves tremendously high temperatures in a closed vessel.

With such kinds of machines, the risks of accidents are always high. And to lessen the risk, one of the safety measures that is included in the machine is the fusible plug. It is also known as a threaded metal cylinder.

If we go back in time, the invention of this small, but effective device, came into the picture in the year 1803, when Richard Trevithick’s had to incur a loss of one of his new boilers of steam engines.

What is a Fusible Plug?

Metals such as bronze, brass, or gunmetal are used in the manufacture of this safety gadget. In steam engines, there remains the possibility of the water level dwindling to lower than normal levels. When this occurs, the temperature in the steam engine firebox (which is usually made of copper) can shoot up to 550 degrees Celsius.

Now, copper does not have the capability to withstand such a high temperature, thus, becomes soft. And for obvious reasons, if the steam box becomes soft, it would not be able to maintain the boiler pressure, resulting in an explosion.

Now coming back to the main subject, the length of the fusible plug is run by a tapered hole. This hole is closed or sealed by a tiny cone plug that is held by an easily-fusible metal, such as tin or lead. These metals have a very low melting point, which gets triggered if a certain temperature is reached (usually a high temperature).

The safety plug is planted into the top plate of the steam engine fire box. In normal conditions, the plug would be in such a state that it stands extending an inch into the water space above it. Now, if the water level falls so that it exposes the top of the plug, the plug gets overheated.

Due to the low melting temperature of the fusible plug, the sealant melts away. This leaves the plug to be nothing less than an ordinary whistle, which produces a noise audible enough to be heard by the operators. This serves to warn them about the water level before it reaches a critically low level and invites catastrophe.

The use of this safety plug serves as the last line of precaution for operators to prevent any mishap in the working of steam engines or boilers. Apart from this, there are other of workplace safety measures which are obviously implemented.

The working of a fusible plug is not 100% foolproof. There could be several cases, because of which, the metal sealant may become oxidized, and this might result in increasing its melting point. And, if any such thing happens, the plug would fail to respond. That is the reason the reliability of this device is always put to test as a last resort.