Leonardo da Vinci was the man who gave us some of the greatest works of art. But, he was much more than just an artist.

Leonardo da Vinci was the man who gave us some of the greatest works of art. But, he was much more than just an artist. 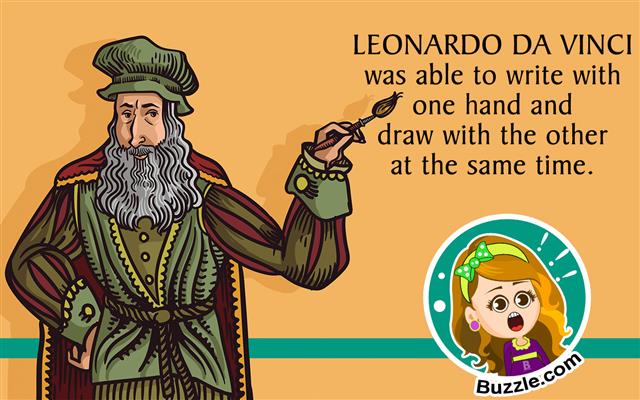 Leicester Codex is the name of one of Leonardo da Vinci’s journals that now belongs to Bill Gates, the Chairman of Microsoft. He purchased it for more than $30 million.

Leonardo da Vinci, applauded even by his contemporaries as one of the most talented people of the Italian Renaissance, was a mystery even at that time. He was a genius whose accomplishments in various fields were awe-inspiring. Known mainly for his unbelievable talent in painting, he was also a sculptor, a mathematician, an inventor, a cartographer, a scientist, a musician, a philosopher, a writer, and above all, an influential and intellectual human being. In fact, there is no denying the fact that Leonardo da Vinci was one of the greatest minds of all time.

Parents: Since Leonardo was born to parents who were not legally married, he did not have a surname. His name ‘Leonardo da Vinci’, literally translates as ‘Leonardo of Vinci’ (Vinci was his birthplace in Italy).

✫ Leonardo never really attended school. However, he was informally taught to read and write at his father’s house. Here, he was also given elementary training in languages, geometry, and arithmetic.

✫ Leonardo da Vinci was a vegetarian, and did not even drink milk in his life.

✫ He was left-handed and always wrote in mirror handwriting, perhaps to guard his ideas from intellectual thieves.

✫ Leonardo never married, neither did he have a romantic relationship with anybody.

✫ It is said that Leonardo used to wear bright colors to make his complexion look fresh. Pink was especially his favorite.

✫ He was famous for his love for animals. Sources tell us that many times, he used to purchase caged animals and birds, in order to set them free.

✫ Da Vinci is said to have left many of his paintings incomplete. Reportedly, he also destroyed a number of his own works.

✫ Leonardo did not make a self-portrait until almost 1515.

“There had never been another man born in the world who knew as much as Leonardo, not so much about painting, sculpture and architecture, as that he was a very great philosopher.”
– Francis I, King of France

Leonardo da Vinci epitomizes the term ‘polymath’. ‘Polymath’ denotes a person of superhuman intellect, intelligence, and talent. Da Vinci has made so many valuable contributions to various diverse fields that as compared to them, his artistic output seems to be minuscule. If the Italian Renaissance had to choose a single mascot for the time, it would surely be Leonardo da Vinci. The man is very rightly called the Renaissance Man.

Leonardo da Vinci produced some great works of art, and was known particularly for his unique styles of sketching and painting. He found numerous patrons in the nobility of Renaissance Italy and France, where some of his major artworks were executed.

Leonardo's first solo painting, completed in 1478, was Madonna and Child.

✫ The Mona Lisa is arguably his most famous work. The subject of this portrait is still debated, the most popular current view being that it is of Lisa Gherardini del Giocondo, whose husband is said to have commissioned the painting.

✫ One of the hypotheses stated that Mona Lisa is the self-portrait of Leonardo as a woman. Though it seemed weird in the beginning, numerous X-ray analyses of the painting suggest that the hypothesis might actually be true.

✫ Da Vinci’s earliest known drawing belongs to 1473, and depicts the Tuscan landscape of the Arno Valley in Italy.

✫ Andrea del Verrocchio, a famous painter at the court of Lorenzo de’ Medici, tutored Leonardo in his early years. Later on, Leonardo himself became a painter at Medici’s court. He then served the Duke of Milan, before finally entering the court of Francis I of France.

✫ The Annunciation is Leonardo’s first completed work, done in conjunction with Verrocchio. It is an oil on canvas painting, depicting Angel Gabriele’s announcement of Mary’s pregnancy with Jesus.

✫ Leonardo painted The Last Supper at Santa Maria delle Grazie in Milan, under Ludovico il Moro’s commission. The painting depicts the moment when Jesus announced that he would be betrayed.

Verrocchio wanted all his pupils to become adept with human anatomy, along with learning the art of painting under his apprenticeship. This was what laid a concrete foundation for Leonardo’s interest in anatomy.

✫ Leonardo was granted permission to dissect corpses at the Santa Maria Nuova Hospital in Florence. Notes from his journals include detailed studies of the human skull, human fetus, internal organs of a woman, muscles, tendons, skeleton, vascular system, etc.

✫ The Vitruvian Man is one of the most famous works of Leonardo da Vinci, which combines art with anatomy and geometry.

✫ Around the time Leonardo began apprenticeship with Verrocchio, he began to study human anatomy. This is one of the primary reasons why Leonardo’s paintings seem so realistic.

✫ Da Vinci carried out detailed study with regards to the anatomy of horses, as indicated by several of his sketches.

✫ He also closely studied and analyzed the effects of emotional fluctuations and age on human physiology.

Leonardo approached science from a holistic, observational, and artistic point of view, rather than being too theoretical and/or experimental. This allowed his inventions to be particularly intricate, thoughtful, and aesthetic, all at the same time.

✫ Leonardo conceptualized and sketched the first flying machines, which included the working sketches of a parachute, a helicopter, a hang glider, and an airplane.

✫ Da Vinci conceptualized a 33-barrelled organ, a sort of a gun that could fire multiple bullets in quick succession. It surely seems like a prototype of a modern machine gun.

✫ He made, for the first time ever, a design of an armored tank, and considered it to be the ultimate war machine.

✫ He also devised a motor car for the first time ever in the history of mankind. It could function on its own without any human intervention, and so can be considered to be world’s first robotic vehicle.

✫ The first ever humanoid robot was constructed in the 15th century by Leonardo da Vinci. This, he had actually built, and was used to entertain people. His notes have been used by NASA to design the planetary exploration robots.

✫ As part of a civil engineering project, Leonardo drafted a sketch of a 220 meters single span bridge in the year 1502; however, the Ottoman Sultan Beyazid II of Constantinople (who the project belonged to) was doubtful about the feasibility of the idea. In 2006, a bridge was constructed in Ås, Norway, based on Leonardo’s 1502 sketch. The project is called Vebjørn Sand Da Vinci Project. The bridge, now serves as a pedestrian crossing over the European route E18.

With respect to the different fields that Leonardo explored, one can say that his intellect and curiosity left almost no stone unturned. Here are some interesting facts about Leonardo’s contributions to allied fields of science.

✫ Leonardo had achieved mastery over the principles of mechanical engineering. He was completely astonished by the different levers and gears, and used them successfully in many of his projects.

✫ He approached botany with aesthetic, rather than scientific curiosity. He was known to draw a single flower several times in his journals, each time from a different angle.

✫ As a cartographer (a maker of maps), Leonardo made several maps of different regions. However, the map that he made of the Commune of Imola in the Italian province of Bologna, is regarded as one of the most accurate maps of the region till date.

✫ In 1472, the Guild of St. Luke, a prestigious guild of artists and doctors of medicine, accepted Da Vinci as their master.

✫ Da Vinci and Michelangelo were contemporaries and arch rivals. They are recorded to have shared such a bitter relationship that they had even insulted each other in public.

✫ Leonardo Da Vinci took as long as ten years to paint Mona Lisa’s lips. He was one of the first few Italian artists to have used oil paints for painting, instead of egg tempera.

✫ Apart from being a Renaissance polymath, Da Vinci was also one of the alleged grandmasters of the Priory of Sion, a secret society that was formulated for the protection of the race of Christ.

Sadly most of the scientific works of Leonardo Da Vinci could never reach the public as they were never published. It is also very unfortunate that many of his works, including some of his meticulously illustrated journals have not been able to withstand the ravages of time. We, as species of the human race, can only hope to be at least half as great as the multi-faceted man, who still continues to inspire the world.