Explanation of the Tyndall Effect with Labeled Diagram

Light, on passing through a colloidal mixture, gets scattered by its particles. This effect is called the Tyndall effect. This extract gives an insight into the definition of the Tyndall effect, and a detailed explanation, coupled with a labeled diagram.

Home / Uncategorized / Explanation of the Tyndall Effect with Labeled Diagram

Light, on passing through a colloidal mixture, gets scattered by its particles. This effect is called the Tyndall effect. This extract gives an insight into the definition of the Tyndall effect, and a detailed explanation, coupled with a labeled diagram.

Only colloids are capable of suspending light rays that are focused on them. This is called the Tyndall effect. No other type of mixture allows this process to occur. Thus, this effect can be used to distinguish between types of mixtures. Solutions that allow this effect can be termed as colloids.

We all have learned about the different types of mixtures: solution, colloid, and suspension. They differ from each other based on the degree of solubility of the solute in the solvent. A solution is a type of mixture in which the solute particles completely dissolve into the solvent. Whereas, in case of a suspension, particles do not dissolve at all. A colloid is the intermediate between a solution and a suspension. Its particles are too small to be seen without an ultra-microscope, but are certainly bigger in size than those of a solution. Let us now understand the important role played by particle size in the Tyndall process.

Definition of Tyndall Effect with a Labeled Diagram

This phenomenon is named after the physicist John Tyndall. It defines the way by which different types of mixtures react to the passage of light focused onto them. In order to understand the concept of this effect, we need to understand which of the wavelengths of light are reflected, and which are transmitted. Here, the light particles having a shorter wavelength are scattered, while those with a longer wavelength are allowed to pass through. 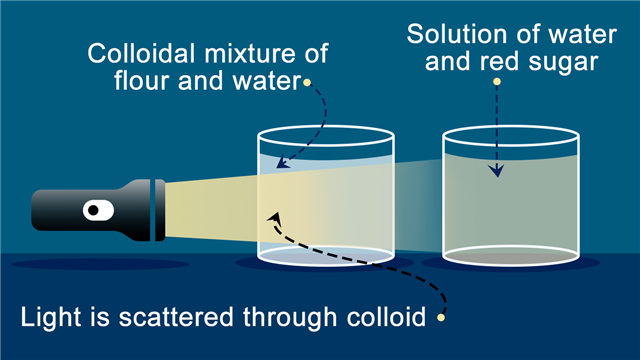 Look at this diagram. It displays two mixtures:

When we focus a flashlight on these beakers, the light rays pass through the mixture of flour and water. Even though the other mixture is a clear solution, light ceases to pass through it. This is because flour particles are bigger in size, and have greater surface area than red sugar particles. Due to their surface area, light particles are suspended by them, which results in the Tyndall effect.

Examples of the Tyndall Effect

Tyndall Effect With Cars in Fog

Tyndall Effect at a Lighthouse

What Causes the Tyndall Effect?

Early morning sun’s rays passing through a forest, scatter light. If the air is misty and contains tiny droplets of moisture, these droplets disperse light. The mixture of air and moisture is a colloid.

A car (with its headlights on) passing by on a foggy road is an apt example of this effect. The light passes through the fog particles and scatters, which is termed as the Tyndall effect.

Human eyes contain melanin, which absorbs light. If the amount of melanin is less, then less light is scattered. Consider clear and translucent human eyes which appear blue. When light falls on them, all of its wavelengths pass through the eyes, after which blue light particles are reflected back. Thus, the eyes appear blue.

Another example can be a lighthouse which is located on a hill. The strong light rays pass through the colloidal air mixture, which brings about dissipation in them.

Does Suspension Show the Tyndall Effect?

The answer to this question is affirmative. Suspensions do exhibit this effect. Consider a simple example of a suspension in which milk is mixed into water. This mixture seems to be blue in color, even when the color of milk is white. This is because, the light particles having lesser wavelength (blue light rays) in the spectrum are scattered more than the light particles having higher wavelength (red light rays).

A solution is a type of mixture whose particles are too small to reflect or diffract light. Thus, solutions keep light from passing through their particles. Consider a solution of water and sugar. Sugar dissolves completely in water, leaving no particulates. As such, light rays have no particle surfaces over which they can get reflected. Thus, it is said that the particles of a solution don’t scatter light rays.

This effect is witnessed by us in our daily lives. The sky appears blue because sunlight passes through the clouds and various other particles in air. Blue light particles have very short wavelength. Thus, the sky is predominantly blue. This effect also finds its use in industrial applications wherein the particle size of aerosols or gases is to be determined.

Given below are the steps and the list of things needed to perform an experiment which shows the Tyndall effect.

1) The colloidal solution of milk and water scatters light, thus explaining the occurrence of the Tyndall effect.
2) The clear solution of sugar and water doesn’t scatter light at all.

In a nutshell, this effect, also termed as Tyndall scattering, doesn’t occur in case of solutions, but for colloids. 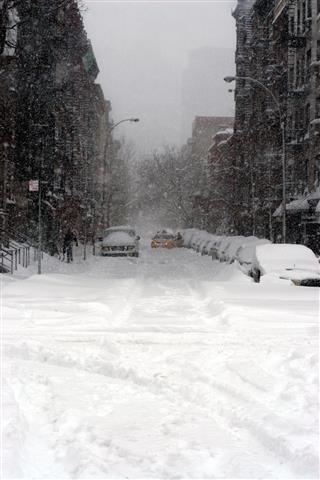 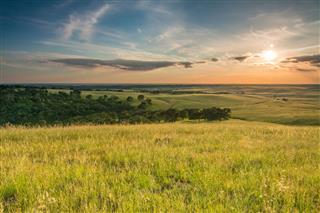