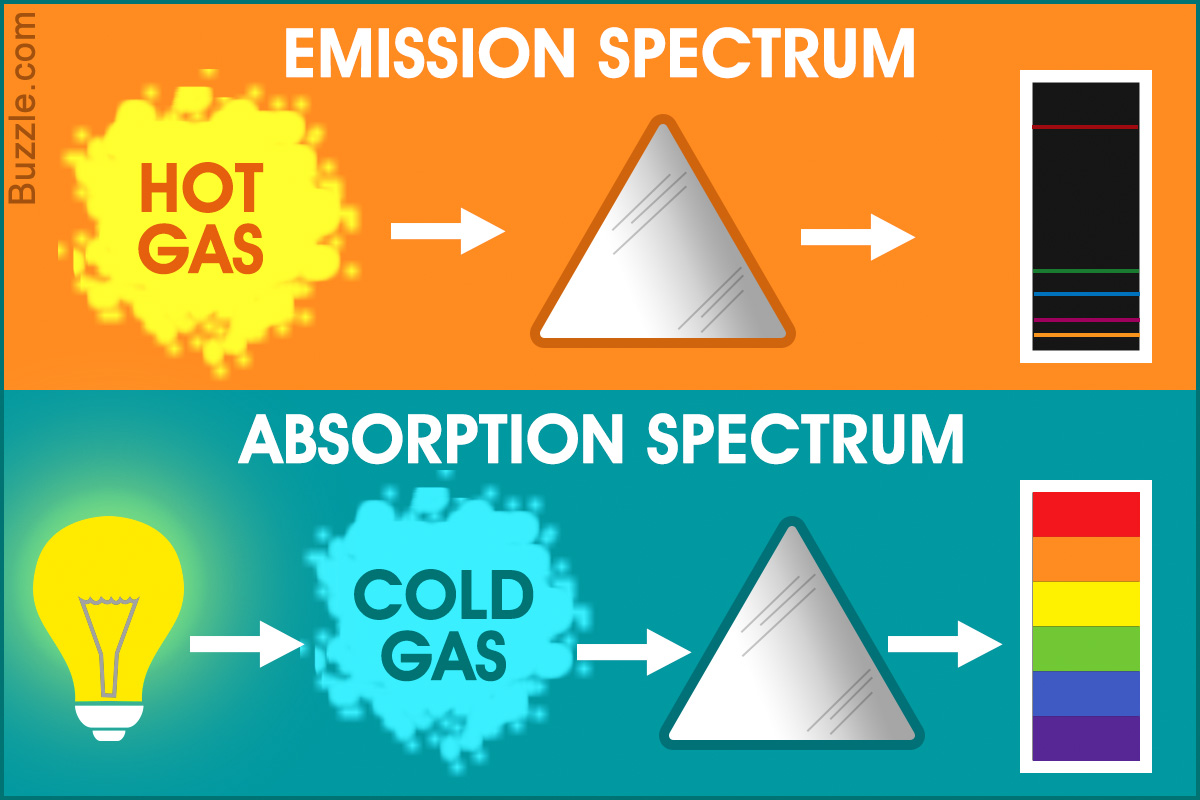 Some parts of the light spectrum can be seen by animals, but not by humans. For example, certain insects can see UV light, while we cannot.

The term ‘Spectrum’ generally refers to electromagnetic spectrum which includes all the frequencies of electromagnetic radiation. Earlier, the term was restricted to light only, but later, it was modified to include other waves too, such as sound waves. Wavelengths range from a picometer to hundreds of megameters. It includes visible spectrum in its ambit, which deals with all the wavelengths that are visible to the naked eye. Other types of radiation include radio waves, gamma rays, X-rays, and so on.

When energy in the form of light, heat, or chemical agents is given to an element, the electrons of its atoms accept the energy and go to higher energy levels. However, these electrons have to emit energy in order to return to their ground state, since the excited state is unstable. The frequencies of light emitted in such a case constitute the emission spectrum. When an electron comes down from an excited state to the ground state, it emits a photon of energy. The energy of this photon depends on the difference between the energy levels of the excited state and ground state of that electron.

Electrons of an element which are in the ground state may absorb incident energy in order to reach a higher energy state. The frequencies of light transmitted through this substance, with dark bands showing absorbed light, constitute the absorption spectrum of the substance.

Emission is the process where a substance gives off or emits radiation when it is heated or treated chemically. The level of emission of a substance depends on its spectroscopic composition and temperature.

Absorption is the process where the electrons of a substance absorb or take up the energy wavelengths incident on them. The atomic and molecular structure of the material governs its level of absorption, along with the amount of electromagnetic radiation, temperature, solid crystal structure, and intermolecular interactions.

● The emission spectrum of a gas is represented by a collection of separate colored lines, with dark spaces between them. The lines are the parts of the spectrum where emission occurs and photons are emitted, while the dark spaces are the parts where there is no emission, hence the darkness. The difference in colors is due to the variation of the energy levels of the electrons.
● In case of ionic solutions, the spectrum will consist of discrete colored bands instead of lines, since the substance here is a compound with different atoms, which together produce complex colors. Emission spectrum is different for different elements subjected to the same source of energy, due to the difference in the excitation energies of the different electrons of the substances. This is why the light emitted by each substance is different.
● The frequency of emission spectrum are frequencies of light that are dependent on the energy of the emission. The energy of the photons emitted is related to its frequency by the following formula:
E = hʋ
Where E = energy of the photon
h = Planck’s constant
ʋ = frequency of the photon
This shows that the frequency of a photon is directly proportional to its energy.
● Emission spectra can be divided into two: line spectrum and continuous spectrum. When the spectrum appears as a series of lines, which are separated by black spaces, it is called a line spectrum. When the spectrum consists of a wide range of colors in a particular wavelength range or interval, it is called continuous spectrum.

Spectroscopy is the study of the spectrum of a substance to investigate more about its properties. Both absorption and emission spectroscopy have a number of uses.

● To identify a substance: Every substance emits lights of different wavelengths. To identify the given substance, light is focused on it or the substance is heated. This causes the electrons to get excited and jump to a higher orbit. The energy emitted by these electrons while returning to their ground states is compared to the characteristic colors of the elements, and the chemical composition of the substance is determined.
● To study the composition of stars: The emission spectra of stars can be recorded and then compared with standard emission spectra of known elements to determine their chemical composition.

● To identify a substance and determine its concentration: An unknown substance can be identified by focusing light of a particular wavelength on it, and then studying the absorption spectrum of the substance. Since substances absorb light only from a particular wavelength or wavelength range, the wavelength of light focused on them is important. This spectrum can be compared with a set of reference values for identification. These reference values are known absorbance values of common elements and compounds. The concentration of the substance in the sample can also be determined.
● To study the composition of stars: The light emitted by stars and planets passes through their atmosphere, where some of it is absorbed by the gases. When the absorption spectra of these gases is recorded and compared to the reference spectra values of gases, the composition of these planets or stars can be determined.
● Remote sensing: Absorption spectroscopy can be used to collect details of the land, including attributes such as forest cover, health of forests or exposed rock surfaces, without any individual actually setting foot on it. When light is focused on the land terrain and its absorption spectra is recorded, it can be used to extract information about the terrain. This is done by comparing the recorded values with reference values of absorbance shown by land with forest cover or exposed rock. In fact, the absorbance values vary depending on the type of the forest, a healthy vegetation will show different values compared to an unhealthy forest cover. It can also provide details of atmospheric composition.