Difference Between Zone of Aeration and Zone of Saturation

The zone of aeration and zone of saturation are two sub-earthen zones that are associated with the storage and replenishment of groundwater. Here, we shall learn about these two layers and find out the difference between them.

Home / Uncategorized / Difference Between Zone of Aeration and Zone of Saturation 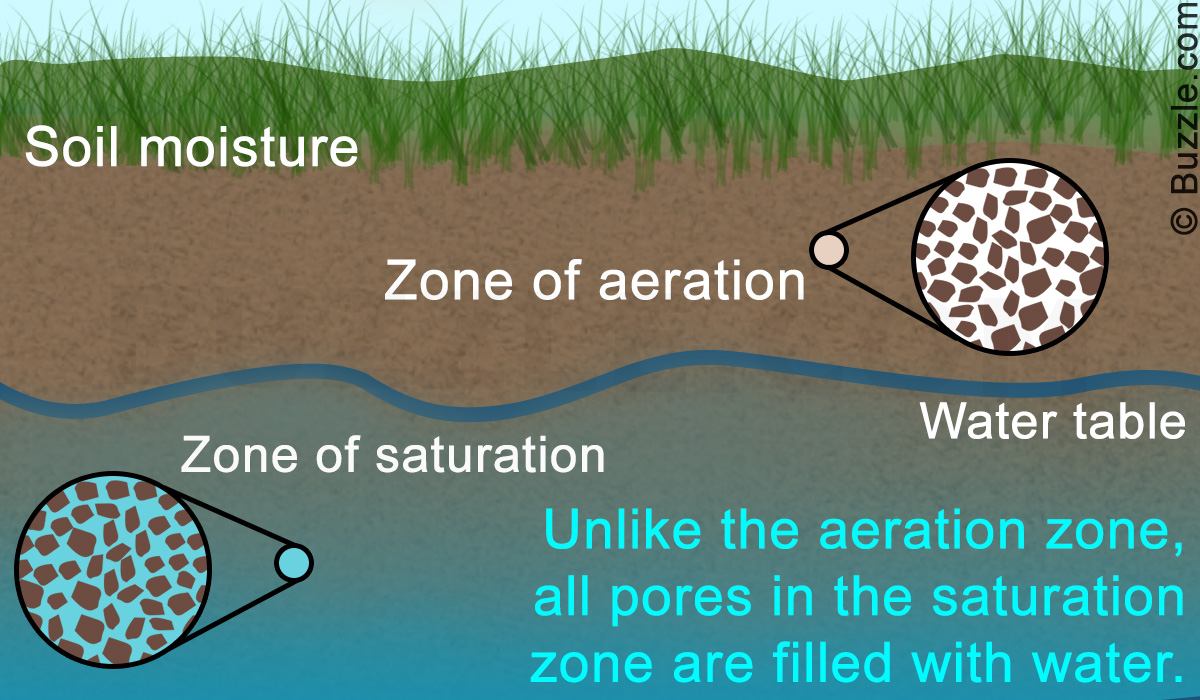 The zone of aeration and zone of saturation are two sub-earthen zones that are associated with the storage and replenishment of groundwater. Here, we shall learn about these two layers and find out the difference between them.

One of the most important natural processes needed for the existence of life on Earth, is the hydro-logical cycle, known simply as the water cycle. It is responsible for bringing in that crucial element―water―required for sustaining life from the oceans into the lands. However, during this process, water is also purified and converted from saltwater to freshwater, thus making it drinkable.

In nature, what comes from the oceans must return, and with nothing to contain it, most of the freshwater brought in flows back to the oceans in the form of rivers and streams. Mother nature, therefore, has put in place a natural underground storage mechanism on the lands, to prevent water from returning. The aeration zone and saturation zone have an important role in this mechanism. What are they and how do they work? Let’s find out. But before that, let’s look at how water from the oceans is brought inland.

The water cycle starts when water in the oceans evaporates due to the Sun’s heat. The water vapors rise in the atmosphere, and form rain clouds at high altitudes. These rain clouds get blown over the lands by winds, where they cause rain. It is mainly through these rains that water reaches inland.

Some portion of the rainwater falling to the Earth feeds the rivers and the streams which flow into the oceans, thereby completing the water cycle. Another portion of rainwater gets soaked by the soil, and subsequently, is absorbed by the trees and plants, or evaporated again due to the Sun’s heat.

The third and last portion of the rainwater gets soaked below the plant’s root-zone, and continues to move downwards via percolation until it reaches the impermeable layer. There it gets stored in the form of groundwater. This results in the formation of underground water table which accounts for a large portion of the freshwater on Earth. Groundwater feeds the lakes and also supplies water to both natural as well as the artificial wells. It is one of the most important sources of water for inland life.

To explain the occurrence of groundwater, the sub-earthen region is split into two main zones: the aeration zone and the saturation zone. Let us examine the characteristics of each of these zones separately in the following sections.

By definition, the zone of aeration is layer of Earth where the pores and cracks are filled with air and water. It is sub-earthen region that exists between the Earth’s surface and water table. This zone mainly comprises porous soil & rock. The pores in this layer are usually partially filled with water, while rest of them are filled with air. Thus, in this layer, air and water are able to interact with each other, leading to aeration of water. Therefore, this zone is known as zone of aeration.

The main source of water in this zone is the rainwater that has percolated through the layer of soil above, in a process known as infiltration. In some cases, water from the water table is also able to rise into the aeration zone, in a process known as capillarity. Capillarity results from the capillary action of the aeration layer where water is able to climb against gravity from a wet particle to a dry one. In the zone of aeration, where water rises and is held against gravity, is known as vadose zone, and the water in it is known as vadose water.

By definition, the zone of saturation is a layer of permeable rock in which the cracks and pores are completely filled with water. As the rainwater keeps penetrating the soil under the influence of gravity through the pores of the aeration layer, it finally reaches the impermeable layer deep below the Earth’s surface. The composition of this layer is such that further penetration is restricted and water is effectively trapped inside the pores of the rocks present there.

The zone of aeration on top followed by the zone of saturation below is the standard configuration which results in the formation of an optimum underground water storage. However, varying geological conditions at different places can give rise to less than ideal underground water reserve formations due to changes in the location and width of the zone of aeration and zone of saturation. The following is a discussion of three such cases.

1. In regions where there is an impermeable rock in the zone of aeration, downward motion of water gets restricted resulting in saturation of the rock present above the impermeable rock. The water in such zones is called perched water. If the perched water is too close to the surface, it may evaporate.

2. In places where sub-earthen regions comprise consolidated and jointed rocks, the water table is mostly discontinuous in nature.

Difference Between Zone of Aeration and Zone of Saturation

Now that we know what the zone of aeration and the zone of saturation are, let’s list out the differences between them.

2. The soil and rocks in the zone of aeration have pores which are partially filled with water and air. The zone of saturation comprises rocks and soil whose pores are saturated with water.

Thus, the zone of aeration forms the top layer through which water penetrates, and the saturation layer is where it gets held and stored. Both zones work together to store water in the water table.