Understanding the Advantages and Disadvantages of Breeder Reactors

Home / Uncategorized / Understanding the Advantages and Disadvantages of Breeder Reactors 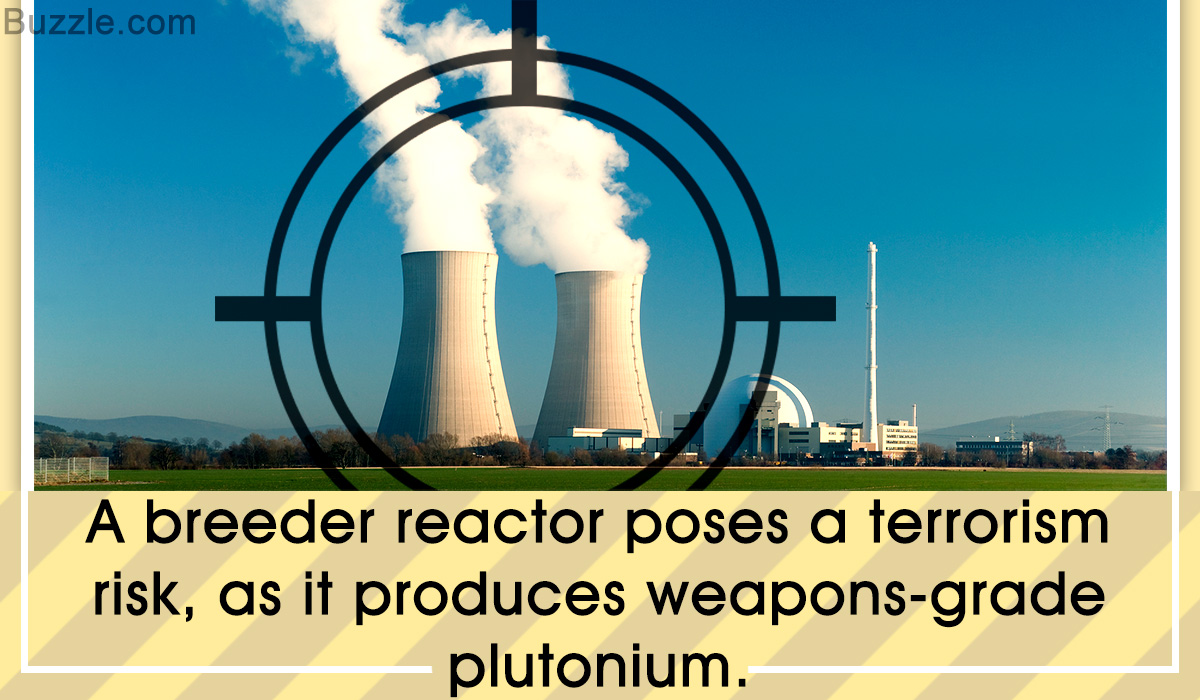 It is feared that an explosion in the Monju breeder reactor in Japan can release 60 times the energy of the atom bomb dropped on Nagasaki in 1945.

Nuclear reactors are devices that utilize the heat generated during the splitting of atoms, to produce energy which is used in the generation of power. These reactors are nuclear reactors which produce more fuel than they utilize in their operation. They contain an inner core of the plutonium isotope Pu-239. This core is surrounded by a shield of the uranium isotope U-238. When it is bombarded with neutrons, plutonium splits to produce smaller fragments, some heat energy, and more neutrons. Some neutrons hit the surrounding U-238 atoms which get converted to Pu-239, effectively producing the fuel itself. The remaining neutrons bombard other plutonium atoms, starting a chain reaction which produces more energy and neutrons. When all the surrounding uranium is converted to plutonium, the fuel is completely regenerated. A breeding reactor is named so because it ‘breeds’ its own fuel.

There is a coolant surrounding the reactor which is used to protect the core from overheating. It absorbs the heat generated during the fission of plutonium atoms and circulates it to a heat exchanger. This heat converts water in the exchanges into steam, which is used to drive a turbine and generate electricity. Let us have a look at the pros and cons of breeder reactors.

◆ A breeder reactor creates 30% more fuel than it consumes. After an initial introduction of enriched uranium, the reactor only needs infrequent addition of stable uranium, which is then converted into the fuel.

◆ It can generate much more energy than traditional coal power plants. Even 3 g of uranium, on undergoing fission, can release ten times the energy produced by a ton of coal.

◆ Breeder reactors can even use the uranium waste from uranium processing plants and spent fuel from traditional fission reactors, along with depleted uranium from nuclear weapons.

◆ Since it reuses fuel, the expenses for mining, and processing of uranium ore are minimized.

◆ Fuel prices of breeder reactors will remain fairly stable because of the abundance of uranium-238 on Earth.

◆ This technology does not contribute to air pollution, except during the mining and processing of uranium ore.

◆ Breeder reactors use a small core, which is important to sustain chain reactions. Besides, they do not even need moderators for slowing down neutrons, as they use fast neutrons.

◆ Breeder reactors use highly enriched fuels, which pose the danger of critical accidents. They also work at a very high temperature and a fast pace.

◆ Plutonium persists for a long time in the environment, with a half-life of 24,000 years, and is highly toxic, causing lung cancer even if a small amount is inhaled.

◆ The byproducts formed during the fission of plutonium have to be removed by reprocessing, as they slow down the neutrons and reduce efficiency. However, this step of reprocessing produces a very pure strain of plutonium, which is ideal for use in nuclear weapons. This poses a risk, as in, terrorists may attempt to sabotage or steal the plutonium.

◆ Till date, not a single breeder reactor has been economically feasible. Every year, billions of dollars worldwide are spent for the safe storage of the plutonium produced, which is then useless, as few reactors use it as fuel.

◆ In practice, a breeder reactor requires 30 years to produce as much plutonium as it utilizes in its operation.

◆ It requires liquefied sodium or potassium metal as a coolant, as water would slow down the neutrons. These metals can cause a mishap, as they react violently when exposed to water or air.

◆ These reactors are complex to operate. Moreover, even minor malfunctions can cause prolonged shutdowns. Their repair is tedious and expensive too.

So, while breeder reactors are highly efficient in producing their own fuel, the danger of nuclear weapons is precisely why most nations choose to stay away from them. This is why, US President Jimmy Carter passed an executive order in 1977, which banned the reprocessing of nuclear material.